Showing posts from May, 2009
Show All

Army of the Noble City-State of Nuln 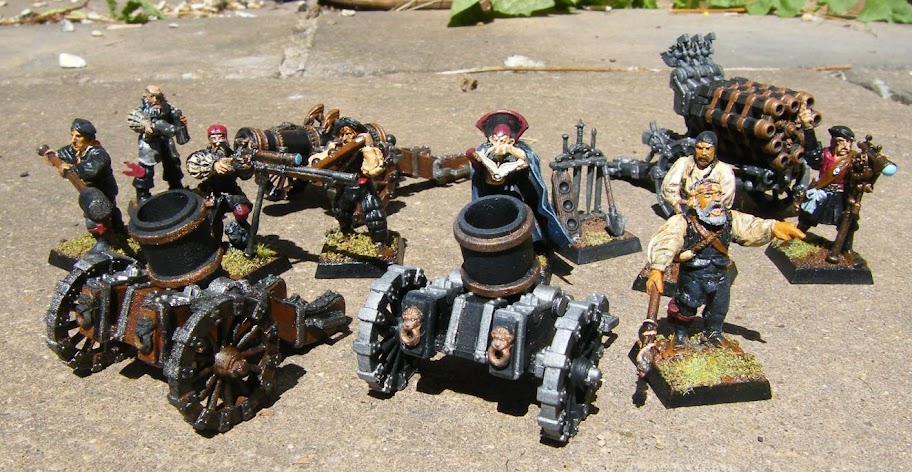 About a year ago I got back into Warhammer having abandoned it just after the release of 5th Edition. I started by picking up the Battle for Skull Pass boxset and liked what I saw. Plastics had come a long way since the last I had seen of them, the rules looked solid... maybe it was time to get sucked back in. The final test was to see if I had gained the discipline to paint an army and so I painted all the Dwarves in the box (the missus wanted the gobbos). Looking at the armies out there I decided to shun my past loves of Undead (the pre-Vampire Counts lot) and Wood Elves (I just didn't like the new figures). Instead my eye got caught by the new look to Empire. Last I had seen of them, they were nearly all metal and a little too flamboyant, but now they seemed gritty and real. I started reading through the backgound materials that I had, to find what I should go for. It was a toss-up between the poor but tough folk of the Stir and the wealthy progressives of Nuln. The deciding f
Post a Comment
Read more

May 28, 2009
Hey guys, I have acquired a few followers over the last couple of months, friends and reciprocal subscribers. I am not really in this for the fame but it is nice to know that I am not just writing to myself. As my exams come to a close I am looking at doing a bit of a re-launch with more photos in posts and more focused posts so less of the rambling sprawl it has been. I'd love people to gimme some feedback on the new layout, let me know if there is anything I should or shouldn't do etc. etc. - Raggy, signing out
2 comments
Read more

May 24, 2009
Another boring pictureless post. I have changed my Things to Paint list to something a little less depressing showing how many I have painted as well as how many are left to paint. Not that this is any real improvement (look at how few have more painted than unpainted!). On the plus side I only have Headsplitter and "Coach" left of my Skaven Skumm Suckers team left to paint! I have kinda lost interest in painting them, I hate painting fur so much and having to paint them so they fit with the others feels like I'm not really working to improve. Thrud the Barbarian is also nearly done. I have painted him, I just need to assemble him and paint up a base for him to go on... this is gonna be the tricky part as I want to use a cast scenic base... that I don't have. So it may take a while to truly finish him off.
1 comment
Read more

May 22, 2009
I have recently been flogging a load of old miniatures to feed my habit. The proceeds have bought the missus a new bed and headboard and I have picked up a fuckload of dwarves, a halfling hot pot and 12 greatswords (at long last!). I had been holding out for the plastic greatswords but fucking £2.50 for a plastic figure is taking the piss not to mention how much of a pain all these unique pose things are. I also picked up a griffon as an alternate mount for my general and a couple of the gotrek & felix novels which haven't arrived yet. I have also picked up some odds and sods on the warseer forum, mostly goblins for the missus to paint up but also a few blood bowl minis and some mordheim reiklanders to add into my Nuln army. So I am moving along with my miniature painting at a fair lick. the 20 spearmen are now complete and I am back to trying to polish off my Skaven BloodBowl team. I am hoping that by Monday I'll just have the coach and Headsplitter left to paint. So enou
2 comments
Read more

May 18, 2009
Well the shit is about to hit the fan and I thought I would take a few minutes out of my last minute revision of Unbounded Plane Waves (don't ask) to post a little update on my progress. Despite the workload I have managed to make good headway with my painting of late, I have repainted the dwarves of Battle for Skull Pass to conform to the Nuln colour scheme... this means that rather than having seperate Karak Norn allies, my army will have dwarves stood shoulder to shoulder with humans in the same unit. I like this idea, especially for a cosmopolitan city like Nuln, it only stands to reason that the troops would be equally varied. It has also served to quickly bolster my army size as the troops only needed small patches recovered. My 40 spearmen are also making headway, being from the old boxset they only have 4 different poses, I love this as not only does it make them a lot easier to paint, it also gives a more regimented look to the unit(s). So far I have finished one of the
Post a Comment
Read more 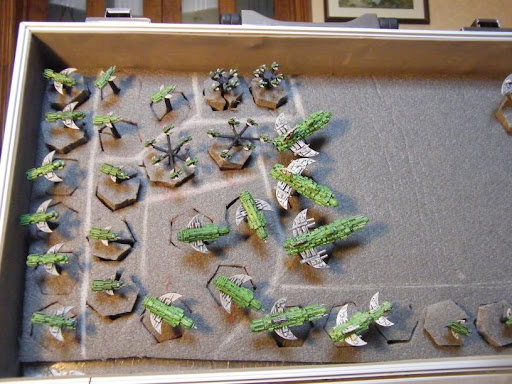 It is exam time in Raggyland which results in a strange mix of lots of miniature work as I try to de-stress and relatively little in the way of updates as it takes a bit too much time to sort out. As a result this may well be the last blog entry for a month or so. On the plus side it should be a good one, with a load of photos to show off, and some news on the projects I am working on. This is my completed Islamic Federation Fleet for Full Thrust. I haven't played a game of this yet but my fiancée's father is a big fan of the game and I managed to pick up most of the ships on the cheap online so I got myself some. He has a huge New Anglian fleet (probably 3 times the size of this!). When I finally do get the chance to play, if I like it I am thinking of collecting a Neu Swabian fleet as I like the ships a lot and have a paint scheme in mind to accuratley reflect 'German Utilitarianism'. In the meantime this is my fleet and I am rather pleased with it. I am glad the
Post a Comment
Read more

May 02, 2009
Mik recently started following my blog so I reciprocated and spent some time yesterday catching up on his past blogs and it got me thinking... Firstly my blog layout is horrendous so I am going to work on putting the images in a better layout and hopefully getting some nicer photos at the same time. I have already started on the more general side I am currently working on the layout of the blog with my miniature painting list already updated and I will be changing things up a bit. Mik also prompted me to take a look at my hobby area and have a bit of a clear out. This is a bit pointless as I am going to be moving at the end of June to a new property so instead I have focused on how my miniatures are stored with painted & unpainted stored in my upright filing drawer and unassembled & bits box in a seperate box. Something Mik wrote in an older blog regarding Games Workshop and their pricing policies made me want to chip in my two cents on the topic. Games Workshop miniatures
2 comments
Read more
More posts