Showing posts from March, 2011
Show All

March 30, 2011
Well it has been a couple of months of bills and poverty. So in light of this, I have been driven to try and purge my collections, hoping to scrape some cash together in time for Salute as there were a few things I had hoped to pick up there. So far I have raised a decent sum on PayPal through eBay and a few listings on Warseer and UKCord. Unfortunately taking the money out of PayPal is stupidly expensive so it is likely to stay there and get spent on eBay or mini sites direct... possibly on BoardGameGuru for Agricola, Thunderstone: Dragonspire or 7 Wonders. Still I have plenty more to sell and will hopefully take a large chunk to Salute's Bring & Buy. If anyone is after Lizardmen (the 1st ed ones), Epic Tyranids/Marines or Imperial Guard stuff (Tanks, Catachans, Storm Troops) then gimme a shout, I will try and get some of the stuff listed on the For Sale blog entry in the coming weeks but time is precious. A lot of this stuff got picked up from a Friend's where I had st
1 comment
Read more

March 23, 2011
Well the last week has been a bit manic, but has had a healthy amount of gaming mixed in. I was able to make it to Epsom and got a chance at long last to get a game of Shogun. I have to say I enjoyed it a great deal. The game is an interesting light block wargame. The 'cube tower' works well both mechanically and thematically, although there can be issues with it being knocked. There are rules to handle this but for the most part it is better to keep the tower on a separate table to minimise the possibility. The game is a lot simpler than it initially appeared to be. We took a little while to get going as we were all new to the game but we quickly worked it out and once we had got in the swing of things, the game moved along at a fair pace. This is a very thinky game, there are a lot of elements that need considering and planning, however the mechanics are simple and quick to learn. Saturday saw my RPG group get back around the table for the first time in a looong time for
Post a Comment
Read more

Back home but not much...

Well after having spent far too long stuck at my parent's place looking after my mum, I have finally made it back to relative normalcy. Thursday night I went along to the Epsom Games Club for the first time in far too long and sat down to my first game of Mansions of Madness, the new product by Fantasy Flight Games. The first thing to say about it is that the characters are taken from Arkham Horror and I LOVE it when they do this for games in the same setting, it really helps ease you into the system even if the rules are quite different (as is the case here). There are some rules questions here and there that has demanded a fair amount of errata on the FFG site. Overall this is a great light RPG, with cluedo elements, and tonnes of theme. Following on from that I was back at Epsom for the Saturday session for March. This was a bit of a mixed bag. I arrived late but was able to join a game of Olympus, a game I hadn't heard of before but a lot of fun. I wasn't even close t
Post a Comment
Read more

Stuck at the 'rents place 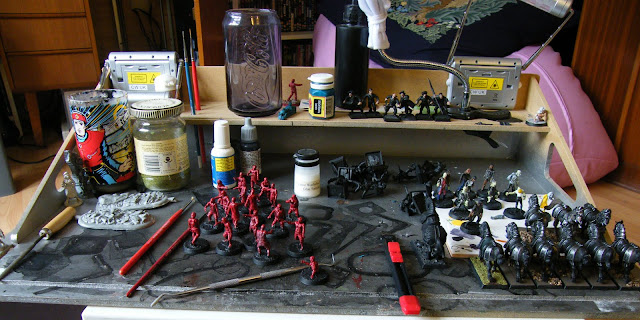 Yup not much gaming or painting or fun of any sort been happening what with one thing and another, mostly Sutton Council trying to screw me. So why am I posting? Well I decided it was time to take some more snaps of the old painting station to show folks: The gaming station in all it's glory... lots going on here! Militia!!! - And what is that turquoise paint for? Zombies!!! Yep I am slowly working my way through the hordes, these are the last of the metal monsters And these are the majority of the plastic zombies Finally we have a few Steeds to bulk out my Knights of the Silver Skull. The horse on the left is a painted example. All my previous steeds were black (I'm lazy) so these new ones will have a little more colour variety to mix it up a bit... it's gonna take forever! Well I hope you enjoyed your visit to my painting station, I am off to the Espom Gaming Club tonight so hopefully some tales of new and exciting games to follow shortly! - Raggy, sign
Post a Comment
Read more
More posts