Showing posts from February, 2016
Show All

Another Weekend, Another Film

February 09, 2016
At this point, there is basically noone for me to hang out with and nothing for me to do aside from watch movies. Not all of these have been on the list but one was... Django Unchained. That's right! At long last, I have seen this film! It is actually very good and a lot more compelling than I was expecting. It's a violent movie but it doesn't follow the darker paths that I was expecting. Of course with Netflix being as shit as it is now, I am left with only one film on this list on there - The Hunt After that I guess I will be paying money to watch the films maybe using streaming rentals where possible. I am wondering if I can push through the last of these 70 films before my birthday. One of the tough things about this list is that it is always changing. So I sample on my Birthday to attempt to keep it contemporary; if I can finish this list by then I can reboot and update on a (hopefully) much shorter list. 70 Films still to watch: (Bold are on Netflix at time of writ
2 comments
Read more 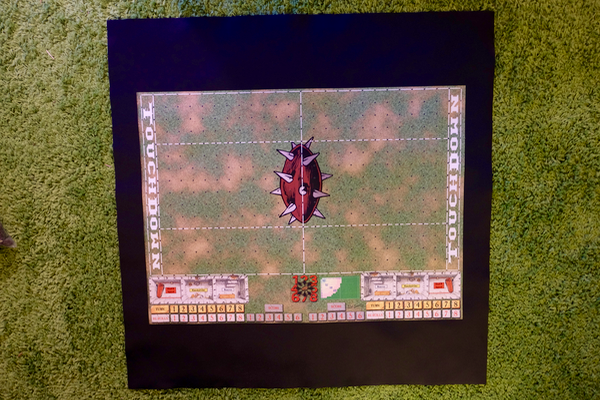 There is a site that I have been a pretty big fan of for a while, it's called inkedgaming . They started as a custom card mat site that would allow you to design your own gaming mats for Netrunner / Magic etc. However they have diversified a little and now offer a range of dice bags, gaming mats and more. I had gotten a small 24"x24" gaming mat during their Black Friday sale back in 2014 and have wavered on ordering some more mats from them (it's a bit of an addiction tbh). Recently they sent me a 20% discount on any order and I was weak and thought well.... fuck it... I'll get myself some shinies... and so I did! I picked up a rather nice sleeve for my card mats and a couple of custom mats: I owe Sir Skofis a big thanks for the source art for this one. This image was taken from a small NAF image . It's not really as high res as needed for the printing but does the job. I also got the scale a little wrong. Yet another shot of my prized fan sta
3 comments
Read more

February 02, 2016
I have finally seen IP Man! It is an incredibly good example of a Martial Arts movie. The plot is better than most (although still not great) but the choreography and fight sequences are really incredible. I always like when you can see the different fighting styles and feel the flow of each as unique. I am not sure the Karate that I saw really felt quite right but everything else was spot on. Painting Minis: Blood Bowl Stands Snotlings Ashigaru Amazon Team Arcadia Quest Figures Zombies (inc Zombicide) Samurai Dystopian Wars Knights Militia Gunners Spearmen That's a couple thousand figures there. I am going to work (as part of this exercise) on turning out faster, lower quality figures. Not terrible, just more scalable whilst still looking good on the table. This is something I am focusing on for the Ashigaru and will hopefully be able to carry on to the Warhammer figures. 71 Films still to watch: (Bold are on Netflix at time of writing) 52 Django Unchained
Post a Comment
Read more
More posts