Showing posts from April, 2009
Show All

The guide to PSPs

April 20, 2009
Up until now I have held off getting a PSP owing to the high price and relatively few games that made me want to play. Now with the release of the DSi and the seemingly unconquerable market share owned by Nintendo, the PSP price point looks to be dropping. So I have started looking at getting my hands on one... but which one? It looks for all the world like Sony have taken a leave out of Microsoft's guide to console marketing: Make the console in more varieties than the average consumer can comprehend... that way they will deffinately buy at least one! I have seen better ideas. So having once again scoured Wikipedia I am slowly getting my mind around the varieties: Core - This is the bog standard with charger, battery and console Value - Core plus headphones (with remote), pouch, wrist strap and 32Mb Memory Stick Pro Duo Slim & Lite (aka 2000series) - The console is thinner and 2/3rds the weight of the original, more outputs, USB charging, double the RAM, UMD Caching and al
Post a Comment
Read more

April 19, 2009
I have now finished my survivors & zombies (well those that I have so far!). I would have shiny new photos... but they turned out to be shite. I will try and get some new photos up in the next few days. I now have 10 Zombies (2 West Wind - Secrets of the Third Reich, 8 Hasslefree), 3 Survivors (all Hasslefree), 8 SWAT (4 West Wind - Road Kill, 4 RAFM - USX). I will take a series of photos including one of the cheap toy cars that I repainted to use in ATZ & SuperSystem. Next up I am going to return to the Superheroes. I have a collection of SuperFigs from the Four Color Miniatures line and Black Cat's Mutant & Madmen line). The first 3 I will be working on are the Primate Supers I have: Harangutan, Goradiator & Big Lou (I have already done Gibbon Glider and I don't have the others).
Post a Comment
Read more 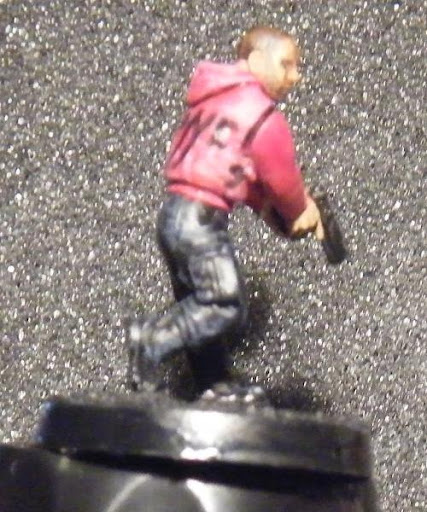 Well I bought a couple of Hasslefree's new Kev Zombie Hunter and have now painted them up as the first of my Zombie Survivors. Unfortunately the photos are rubbish but I am pretty pleased with the results.
Post a Comment
Read more 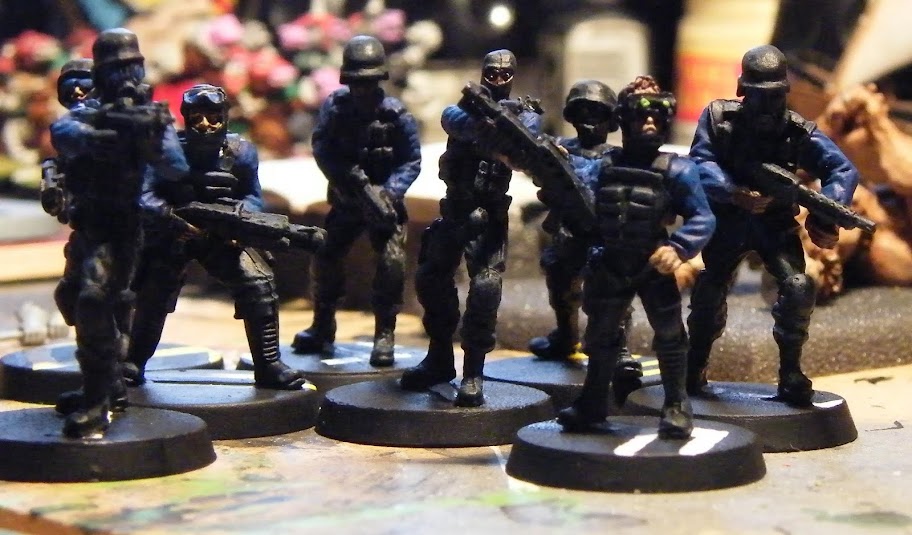 Well I have finished my SWAT team. There are 8 miniatures in all, 4 from the USX Range by RAFM (the taller miniatures) and the other 4 from West Wind's Road Kill range. In my mind the USX are nicer sculpts but are at least 32mm scale and although it isn't a massive issue you can tell without having o look too hard. My main issue with the West Wind miniatures is the faces which are not very well sculpted and it looks like the sculptor has given up on a couple of miniatures and just stuck Aviator Sunglasses on to cover the issue. That said, the one miniature with the goggles (not night vision) above his head has a very well sculpted face and is possibly my favorite miniature of all of them, one of the others looks simply comical with an over sized helemt that he can't possibly see under. Whilst I like slightly comic miniatures (esp GW and Privateer Press Goblins) I don't think it is really the right feel for SWAT, where it might fit better in a militia or young terrorist/
Post a Comment
Read more 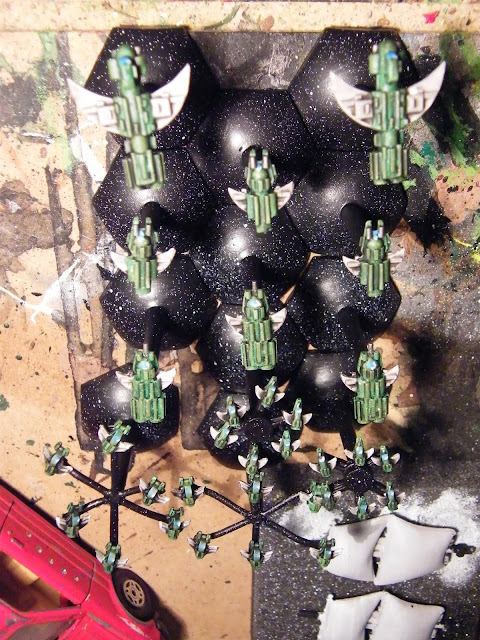 Well I have gotten as far as I can with the Islamic Federation Ships without seeing the originals to compare them to. I think I have missed out some highlighting on the wings in skull white, and on the body in scorpion green. - Raggy, signing out
Post a Comment
Read more

About time for an update 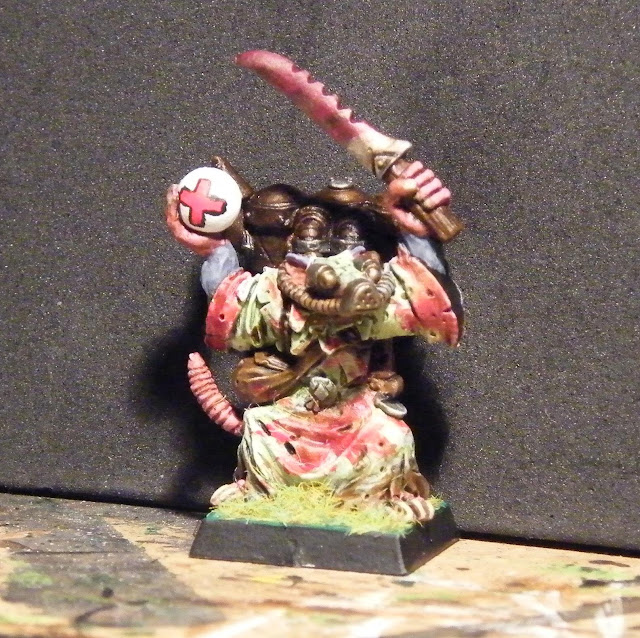 Well folks, I figured it was about time I posted an update. Not made a lot of progress recently as I have been away in London. I went to Salute for the first time, a great experience where I spent a load of money I don't have on minis I can't afford! I have however finished my Skaven Apothecary for Blood Bowl. As you can see from the images on the right, one near finished and one finally done. I have also been working on the last of my Full Thrust Islamic Federation ships... this is proving to be a little tricky as I haven't got any of my currently painted ones at hand for colour reference and I am terrible at remembering this kind of stuff, so in the meantime I am painting as much as I can remember. I have also finished 4 more zombies bringing my total up to 6. I bought a couple more from Hasslefree and a few survivors. I also picked up a load of SWAT troops. Once they've all been painted up I am gonna splash out on the studio miniatures line of zombies and surviv
Post a Comment
Read more
More posts