Back home but not much...

March 15, 2011 board games Dystopian Wars Nuln painting station
Well after having spent far too long stuck at my parent's place looking after my mum, I have finally made it back to relative normalcy. Thursday night I went along to the Epsom Games Club for the first time in far too long and sat down to my first game of Mansions of Madness, the new product by Fantasy Flight Games. The first thing to say about it is that the characters are taken from Arkham Horror and I LOVE it when they do this for games in the same setting, it really helps ease you into the system even if the rules are quite different (as is the case here). There are some rules questions here and there that has demanded a fair amount of errata on the FFG site. Overall this is a great light RPG, with cluedo elements, and tonnes of theme.

Following on from that I was back at Epsom for the Saturday session for March. This was a bit of a mixed bag. I arrived late but was able to join a game of Olympus, a game I hadn't heard of before but a lot of fun. I wasn't even close to winning but really felt like I knew what I was working toward. In future I would know to pay a little more attention to how others are developing. This was followed by a game of Dominant Species... never again. I am not a fan of long games as a rule but this one was intolerable, nothing in the mechanics seemed to demand a game as long as it was and the amount the game changes between two of your actions makes any attempt at planning prior to your next action futile, which all doesn't do anything to help with my biggest bugbear: AP... and this game oozed it out of half the players dragging a long game out even further.

On the miniature front... as last night was the first I spent at home, the workstation hasn't changed much since last I showed it, but I have made a little progress, my Empire of the Blazing Sun fleet has started to take colour... turquoise:

The battleship is even getting magnetised turrets: 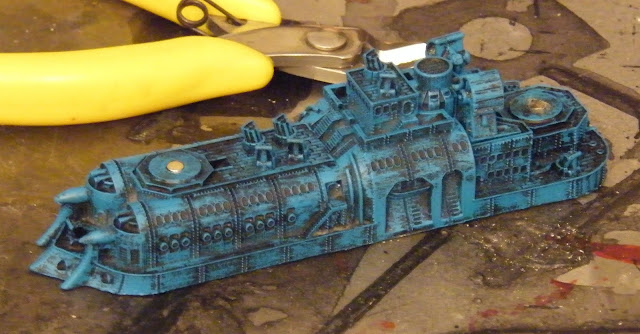 The ships are looking very flat at the moment but will be getting a bit more to them I hope, I am rubbish with drybrushing... wetbrushing in this case. I will be going over the whole lot with a very slight copper coating before painting decks and details and the like.

I have also painted up my next batch of militia a little more:

Not that you can make out ANYthing from these horrendously shoddy photos but flesh is getting done and I am hoping to move onto the metal tomorrow... if I can escape the 'rents (Going again tonight...) 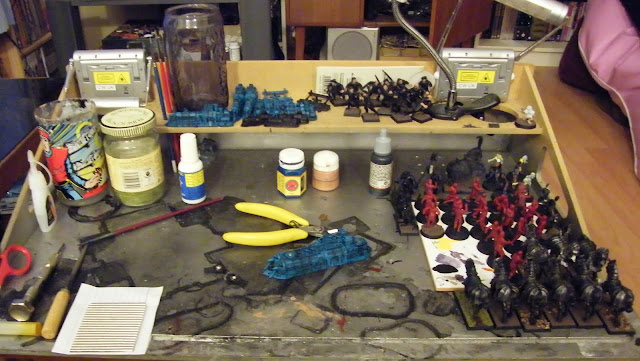 Thursday will see me back at Epsom Games Club and hopefully I will be playing Shogun at long last! It is a game I have been dying to play since I first heard about it, shortly after it's release.