September 12, 2016 Arkham Files Black Scorpion cleaning guide priming
This article is something of a follow up to my previous article about priming Black Scorpion miniatures. Not just because I am too lazy to write a real post, but this issue has been on my mind a lot recently as I am getting started on painting up another two black scorpion resin teams.

In that first article, I concluded that Rustoleum Painter's Touch Flat White Primer works for these figures. These primers will eat very slightly into the surface and help holds the paint. Since this article went up, I have played out the rest of the Blood Bowl Season with the Amazon team that I painted with this method. Now I will say that the team was painted over some time and with some rough handling in between sessions and so they are certainly not the best figures I have, even so they seem to be wearing out faster than I would have expected and this lead me to go back to the drawing board with priming these troublesome Black Scorpion figures.

Since asking the question around more widely (notably on TalkFantasyFootball), I have found a few folks with similar issues and many with considerable confusion about why there is an issue at all. Back in the day, Black Scorpion used to do awesome metal minis and many of their figures today are the same sculpts, cast now in resin. To my knowledge, there are no issues with their metal figures (confirmed by a fellow coach in my local Blood Bowl league). Black Scorpion started by doing a grey (gray in american) resin that also had no issues, however it seems that in the last year or so, they switched to a 'white' resin (see comparison below) that is where all the issues seem to reside.


Looking back at the wear on the Amazon team, and knowing I had already bought full Chaos and Pro Elf (Human centurion sculpt) teams... I figured I should try and find out how to get this shit sorted and paint these figures up so they will at least stay painted.

Another coach mentioned that, as resin is slightly porous, it can take a great deal of time to dry our properly after washing and I certainly thought this a reasonable concern. Water under the paint surface would likely help lift the paint off. I was also aware of the fact that Reaper strongly recommends that you do not prime their Bones miniatures and, although the materials seem pretty different property wise, I figured that it couldn't hurt to try this option out.

So firstly I tried painting with out priming... this was a mistake. The paint beaded as if I had tried to apply it to a layer of oil. This was of course after I had washed the figure heavily and allowed it to dry for well over a week in an apartment that averages well in excess of 20C (I'm sorry Americans - I refuse to recognise your preferred temperature units as they are ridiculous - you'll have to Google the conversion). Anyway there should be no doubt it was dry by the time I applied the paint. This was also neat, vallejo paint - no added water and yet it beaded so badly that I didn't even bother to take a photo. I will say that it did dry... eventually but even that took a couple of days for it to be touch dry.

Clearly a primer was called for.

The friend that mentioned drying time, also suggested Duplicolor primers and I ended up trying some of their Sandable Primers. The results were pretty good, as good as the Rustoleum; the figures held up to the wipe with tissue, wipe with finger, even the strong rub with finger... so I decided to push the limits... a finger nail!

I wanted to try out a few different materials, but give them all the same fighting chance. To this end, two weeks ahead of priming, I washed them all, scrubbed them with soap and water and set them to dry.

After two weeks, I primed them with two light layers of the Black Sandable primer and then a top down directional highlight of the White Sandable primer.

I left them a couple of day to dry and then applied the fingernail.

To be clear, this is not gouging away at the figure. I was running my nail over the surface with about enough force to barely take off the foil on a scratchcard. Here are the results:

Sadly it seems that there is no good solution (except possibly not buying Black Scorpion). It is a real shame given how nice the sculpts are and how affordable it is to buy a complete team. I will be sending a link to this article to the support team at Black Scorpion, asking them to reconsider their resin choices but previous correspondence has gone unanswered so I have little hope this will make any difference. Please see this post for my correction around this statement.

As an afternote; I also had a resin figure that I liked so much un painted (the rock looks really rock-like!) that I figured I would try painting it up without primer and as you can see, it survived the scratch test! 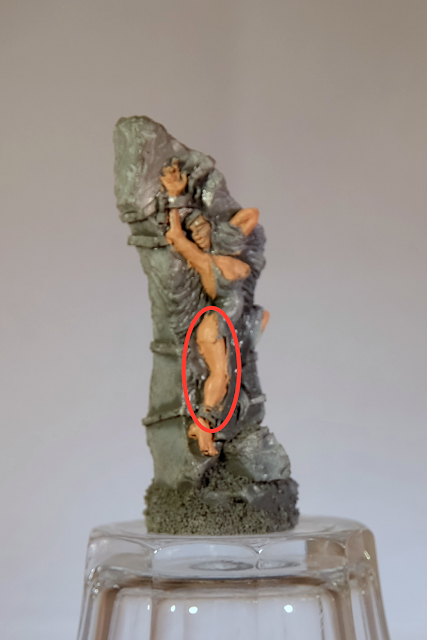 For those of you that are curious, I think this is a Ramshackle Games figure, however I was unable to identify it in the store, and it's been sitting in my lead mountain forever so I may well be wrong. But it does go to show that resin can be pretty forgiving!

Lastly this chappy has joined the list of figures to do in the near future, along with a couple of buddies: 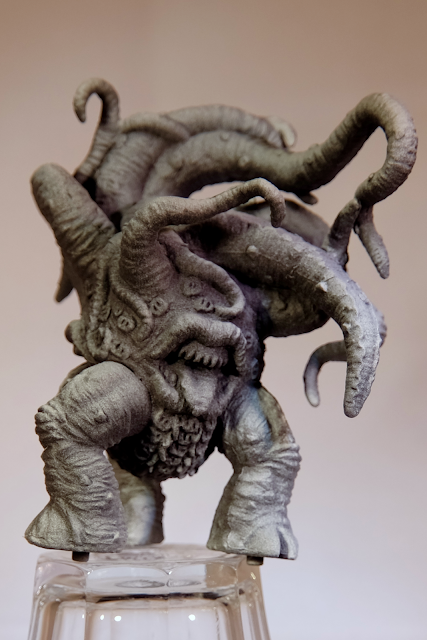