You're not painter without a brush, you ain't pirates without a ship! 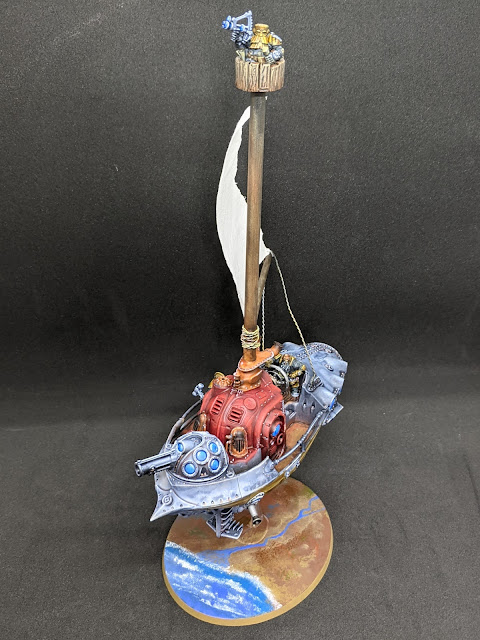 Month 2 is upon us and I have a confession to make - I started this month's project early. Cheating I know but as you will see - there was a lot of work involved and at the start of the project I only had a hazy idea of what I was looking to achieve.

I like the idea of sky ships and I understand the in-universe reasoning for giant metal balloons to make it float... but I never really dug the aesthetic of them. My original plan had been to sand the balloons down and do some crazy awesome freehand all over them... there were a couple of problems with this plan. I still didn't feel it was particularly in line with pirates and of course the bigger problem - I am far from capable of sane awesome freehand let alone crazy... Taking a closer look at the sculpts I also realized that simply sanding down was unlikely to be effective as the detailing on the surface is extensive so a smooth spherical finish would be challenging.
It was thoughts of Skies of Arcadia that brought me my solution - regular sails! I went through a load of possible configurations with multiple masts, square sails, bermuda sails. Ultimately I landed on a gaff-rigged sloop-frigate with a carvel hull. The latter was particularly important to me - it irks me that there is an 'ironclad' ship in the fleet when ALL the ships are either ironclad or full metal constructions. The solution? Well to redesign the hull on all the frigates for a wood finish of course! Clanker is the other main option but this construction type would likely require more substantial resculpting that I wasn't ready to undertake. (Maybe a something to do for a future frigate!) 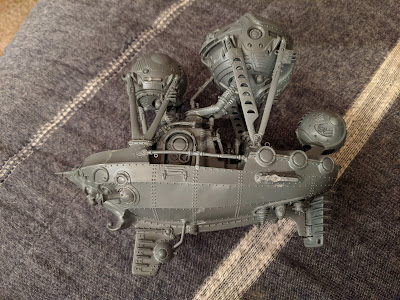 I got a second hand frigate pre-assembled as a test of what I am intending to do so I could get a better sense of how things should look when assembled and not worry too much about any mistakes I might make.
The most time consuming part of the whole build was trying to establish a wood grain. I explored several different possible methods but in the end opted for simply carving the planks into the hull... 'simple' in theory. This proved to be long winded and fairly slow going and tricky to get planks that look straight. I also discovered that my efforts to carve wood grain was pretty much a dud and I had to go back and paint the grain onto the planks. 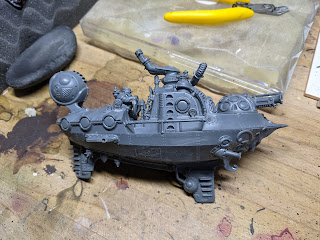 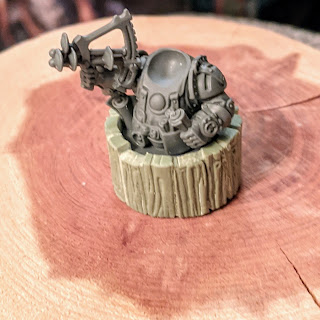 Sculpting the crow's nest is an interesting experience. I am really amazed at how successful it was. If you'd like to see more detail on how I did this, I have a full tutorial here. 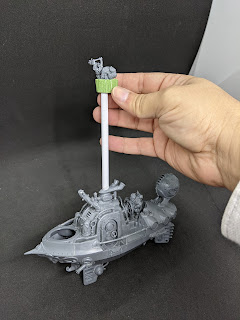 At this point I actually took the plunge and started work on a fresh built ship, going with a simple Bermuda Rig (classic triangular sail). Don't worry, I will be coming back to the gaff-rig model in a future month, but for my first model I wanted to have something I'd fully built. This also made several elements a lot easier to execute such as the rigging - I kept it a lot more restrictive than you'd likely see on an actual ship but hopefully enough to still sell the effect. The rigging was created with 2 strand, 26 gauge copper wire spun together using a low speed electric drill to twist them together. I was a little over cautious and the result is a looser braid than I desired - I'll work on it for next time.
The mast was given some slight wood texture with the application of a course sandpaper to help it feel a little more like weathered wood than a steel pole or something. It also provides something for a drybrush to pick out. 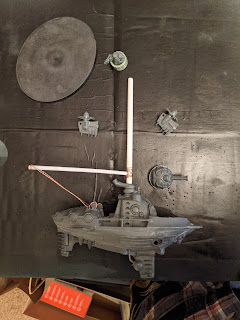 With all the pieces put together it was finally time to get painting. I started with a zenithal to give me a strong initial light/dark contrast. As you can see I also used this effect to introduce some panel highlighting on the model to help give more visual interest to the large panel areas. 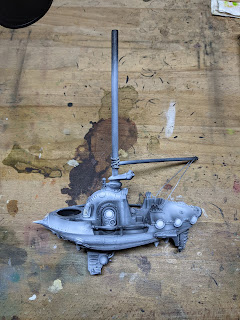 Working with the my own built model also ensured I could paint the crew separately (the second-hand frigate already had the crew in place). I am now at the point were I think the uniforms are pretty routine to paint. They still don't have as much visual pop as I'd like but they are quick to paint and don't look too bad I don't think. 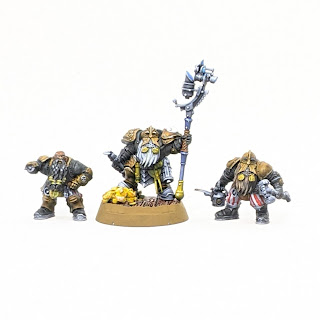 It took a long time for me to settle on a colour scheme for the frigate - particularly the upper hull but in the end the bright cabin and clean metal look seems to have worked well. All of these are applied with contrast paints - Blood Angels Red, Gryphcharger Grey and Aggaros Dunes for the wooden hull. Painting large, flat surfaces with contrast paints CAN be done however you have to be quick, try to break the areas you paint at a time into the smallest units you can, use slightly more paint than you need, get a single layer down and then wick up the excess before the paint dries (or you will get those ugly stain lines). If you do get a few instances of tide marks - you can use sponging of an appropriate colour to disguise any problems. 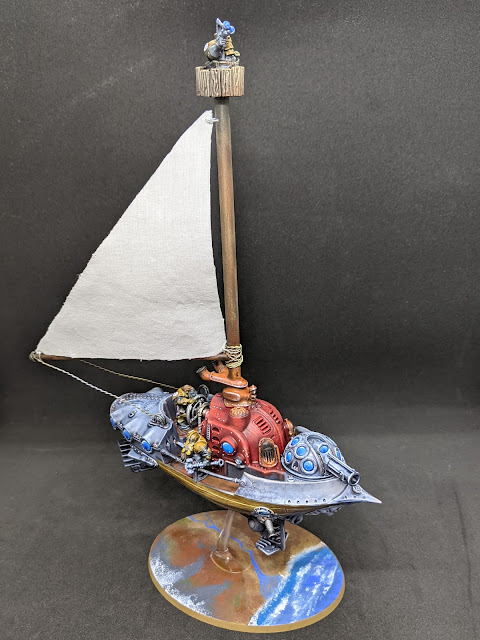 For the base - I wanted to give the impression of the ship really soaring at altitude over Ghur, so I painted up an abstracted piece of terrain, using coast and river to hopefully give a sense of scale. This was definitely rushed and I think I will have to go back and rework it in the future, along with a few other elements I am not super happy with (the wood grain effect, the flooring and a name for this beauty).
And so I dub this ship 'Grugni's Endurance' - Grugni bless her and all those who sail her. 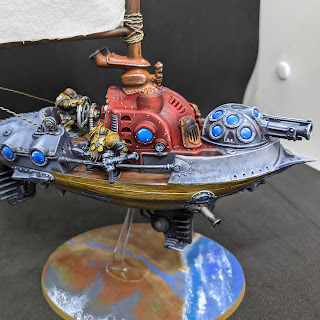 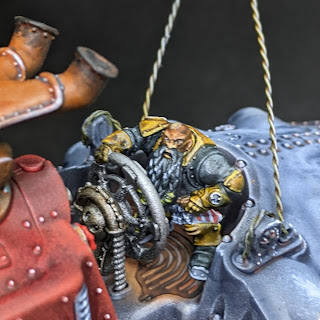 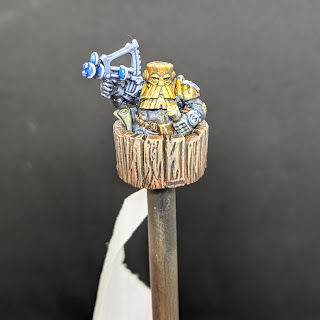