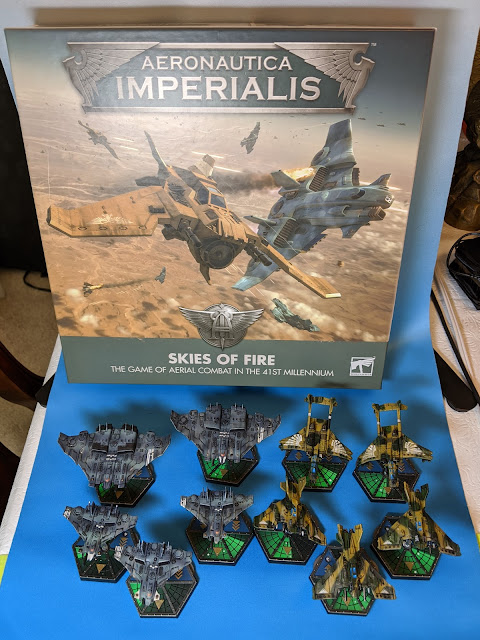 As a last minute addition to the NOVA Open Charity Raffle - I volunteered to paint up an Aeronautica Imperialis starter box. If you'd like to by a raffle ticket they can be found here: https://www.novaopenfoundation.org/product-page/aeronautica-imperialis-gw (That's right - this whole box could be yours for $8.00!!! and you get to help out a great cause, what could be better?).
Assembling these models is not simple. For models in a boardgame, they are exquisitely detailed but not well suited for a typical casual boardgamer to assemble with many small parts and a very high density set of sprues. But once they're together, I'm sure you'll agree that it's well worth the effort! 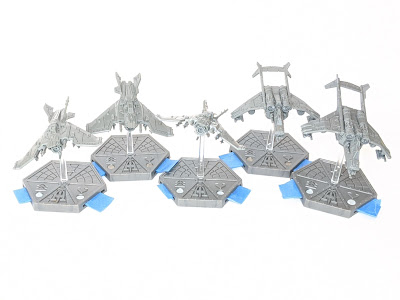 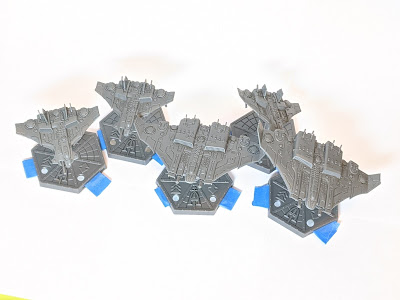 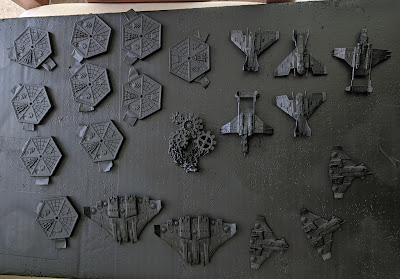 Bases:
Ok let's get cracking on this project! From the beginning, I knew I was going to paint the bases. Some people have left them, or just sprayed them a single colour, but with the gorgeous detailing and clear radar aesthetic, I knew I would have to get a green radar effect onto these. Beyond that, I really wasn't sure how I'd handle it (you'll see a lot of uncertainty in this post). In the end, I decided to go ahead with a flat blue for the two filled panels on each base and the typical silver & gold detailing that is so common on the pictures of bases you see online.
But before we dive into all that, we need to get the radar effect in place. With an airbrush this is a trivial effort - it starts with a piece of masking tape that is run from the centre of the base out to one edge. This provides our leading edge on the display. I ultimately decided to pick a slightly different point for each base rather than trying to make them uniform.
Next I feathered in some white ink to provide the fade for the trace. This is because I wanted to ensure the green is really vibrant, it also allowed me to use this emerald green ink which is semi transparent but also a super vibrant colour over a white base. The semi transparent nature of it meant that I could lightly spray it over the black as well as the white to help blend the whole effect: 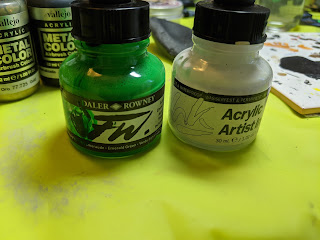 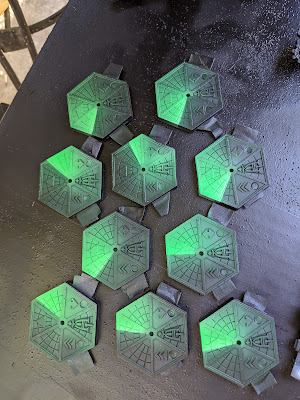 With this done, it's time to move to the brush and knock out the rest of the detailing. I opted for a simple Prussian Blue on the flat tiles. This was to give it something of an 'Official' Imperial look to the bases. While this may not make sense for the Tau, it matches the insignia of all bases being inscribed AI. It also provides a colour that stands out a little without being to bright and removing attention from the models themselves which are already quite muted.
Speaking of inscriptions. I had been really torn on whether to introduce gold onto the bases for much the same reason. In the end, I was swayed by the popular response based on what I'd seen online of painted bases that had a clear preference for using gold for the iconography. 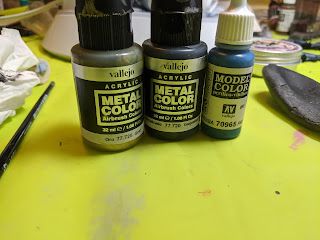 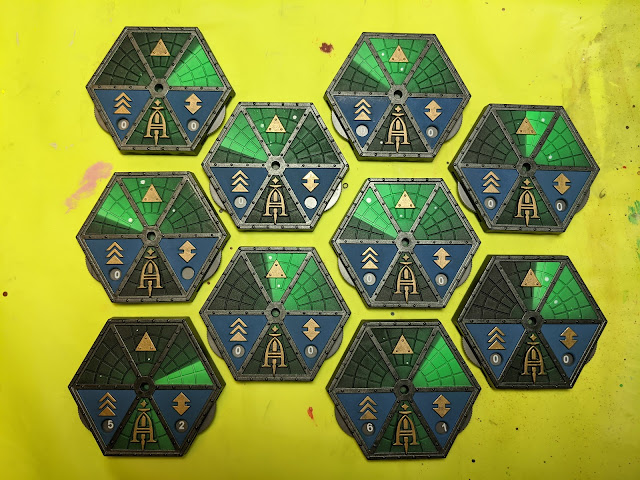 Imperial Fliers:
This is a simplified version of how I paint up my Taurox in my airbrushing tanks 1-day class. I used roughly the same colours that I use in that class. It's a colour combination inspired by a standard patter from the WWII Afrika Korps. Servicable, simple and fun. The finish here is slightly different as I was controlling the fades a little differently. 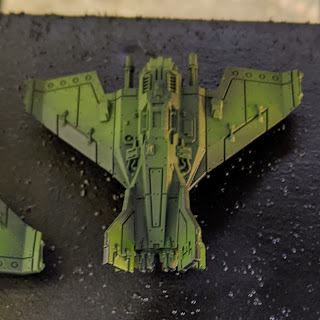 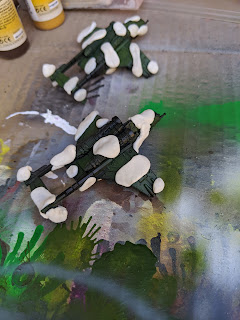 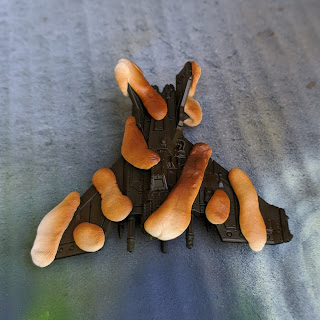 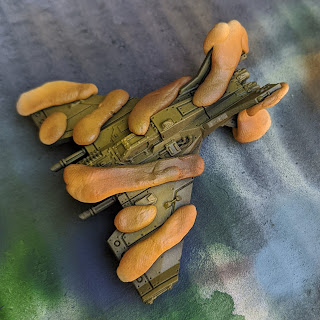 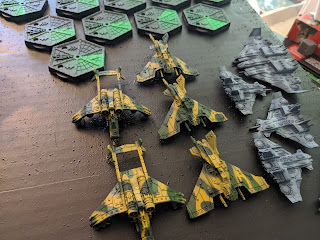 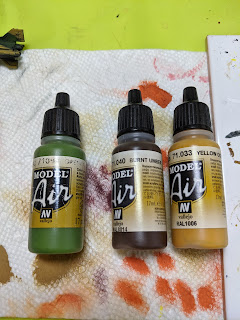 When airbrushing the Imperial Flyers, I left the undersides largely untouched, they aren't visible from the tabletop and for night fighter camo patterns it was common to paint the underbelly of planes black in any case. For a daytime pattern a light, desaturated blue such as the VMA pale blue used on the Tau below would be a good choice.
At this stage I did some light edge highlighting to help the panels and wings pop a little using GW Death Guard Green and VMA Ivory. I kept this very light - with models of this scale an edge highlight can quickly overwhelm a model.
Tau Flyers:
Before getting started with these, I wanted to ensure there was some strong panel highlighting - this was achieved with Vallejo White Ink targeted on the centre of certain panels. At this scale, some generalisations has to be made rather than truly picking out each panel. This is a step that get's largely eliminated in the next couple of steps, and should be exaggerated a little to help ensure the slight visual interest it generates - persists. 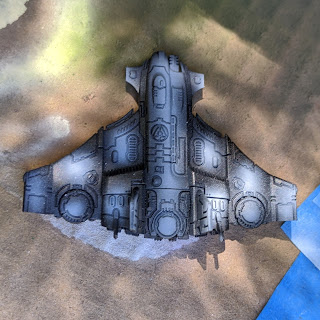 Next up it's time to lay down the first base coat of VMA Grey Blue. This is a very desaturated, cool neutral colour that works super well for naval aircraft patterns. To me, it's just the same colour as the Atlantic. Slightly miserable and depressing... 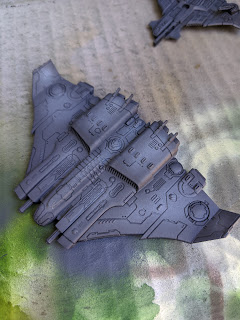 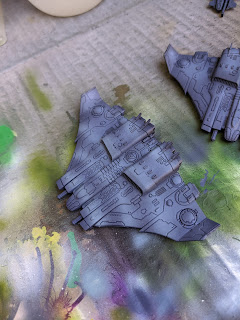 Now we get to my biggest hesitancy in painting these models - how to do camo for the Tau. I had a clear idea of what I wanted with the Imperial side, but had originally anticipated painting Orks as the other faction (the original AI box). Tau are gorgeous but I am not familiar with them as a faction and have seen many hugely diverse camo patterns for them. Ultimately I went for something simple but effective. 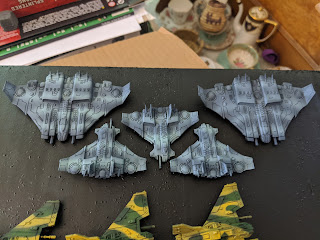 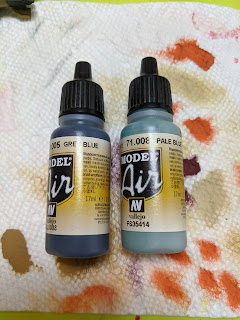 As with the Imperials, I did do some edge highlighting here but because of the colours used, I went with Windsor & Newton Titanium White thinned and applied lightly.

Decals, Weathering & Pin Wash:
Back to the airbrush to apply a gloss coat to help with the next steps.
First up - Decals / Waterslide Transfers; I'm going to just direct you to a video I created right after doing the ones on these flyers to show you how I went about this process. The important thing it not to rush, and to try not to push the brush in stage two, just dab.
After Decals - it's time to weather. I used a mix of pigments to do this. Increasing the green slightly for the Imperial fighters. I'll do a full tutorial on weathering pigments at some point but for this I disolved them in iso and worked back and forth between solution and pure iso until I had an effect I was happy with. Light strokes otherwise you may lift the transfers. 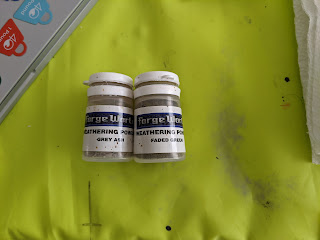 Finally! Pin Wash. After another coat of gloss varnish, Tamiya panel liner in the grooves, let it dry for 10-15 min and then come in with white spirit and clean up any excess.
A layer of Dullcote and you're good to go! 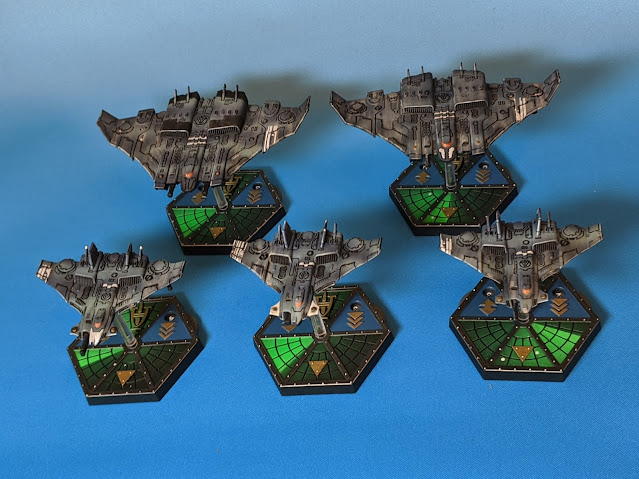 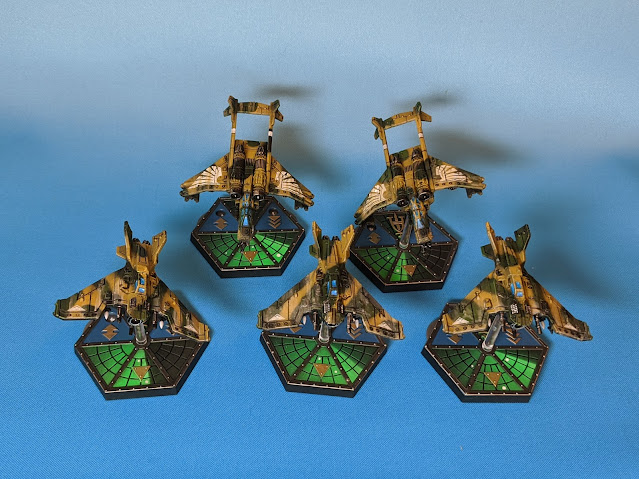