An Exercise in the Study of Light

I recently picked up a copy of Figopedia by Jeremie Bonamant Teboul. It had been recommended to me a couple of years ago by Caleb Wisenback of CK Studios but I'd held off getting it as the shipping can be a little expensive. A recent group order however made it a lot more affordable and so I splashed out.

I quickly worked my way through the first half of the book - the section on Light (my rapid progress was helped in no small part by the large quantity of images that really help you digest what Jeremie is expressing in his prose.

One of the aspects discussed is having a clear impression of the source of light and how this reflects on the surface of the model. Now there are a lot of elements at play here (material, viewing angle, light proximity & brightness) and although it's something I have considered in my painting for a long while, it is often secondary to getting the colours right and the texturing detailed not to mention smoothing the blends. To this end I decided to set myself a little project - painting by hand Hrothgorn's Mantrappers in simple light.

What do I mean by this? Well I settled on a few out of the pot colours to work with (Jeremie recommends in the book basically only one ore two - highlight and possible midtone). I opted for 4 to allow me to introduce a few extreme highlights as well: 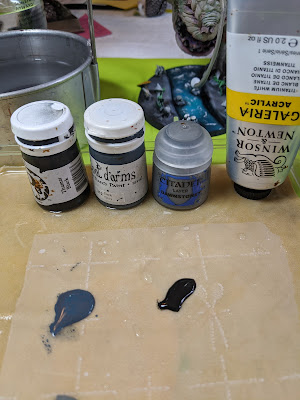 With that I dived into the exercise. I used a rattlecan (Krylon Black Primer) to get a good solid black on the models. 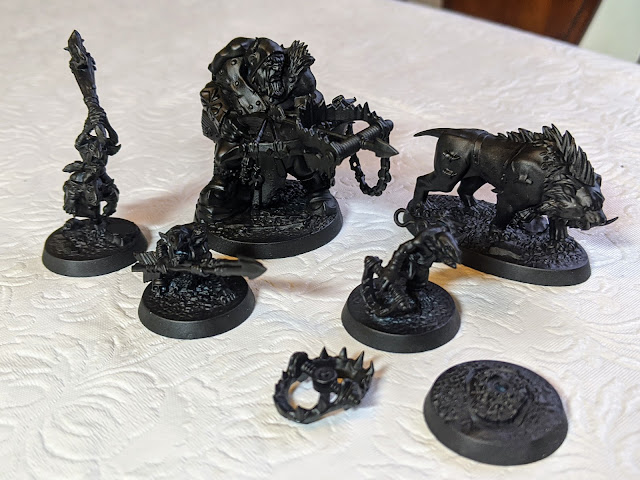 Now the important thing here is working with blocks of colours. I am making no attempt to smooth transitions, blend or anything of that nature. We're looking to create a reasonably strong contrast at each stage.

My first 'highlight' effectively establishes everything that isn't in shadow. I am trying to keep my lighting true to how I normally paint - a primary light source coming at the model from the front right and a secondary light source from the back left to light the back of the model. 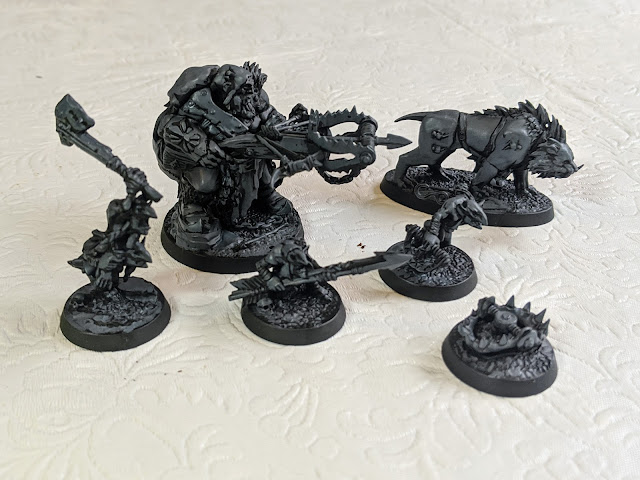 At this stage I was pretty happy where I'd laid down paint. I used some Thamar black here and there in order to sharpen up the lines and fix a few mistakes. You can see that I have also used blacklining pretty extensively to help define the shapes and details of the models.

It's with the second highlight that things started to go a little sideways. My positioning was still largely on point however other issues were highlighted which go some way to explaining why Jeremie only suggests 2 highlight colours max. 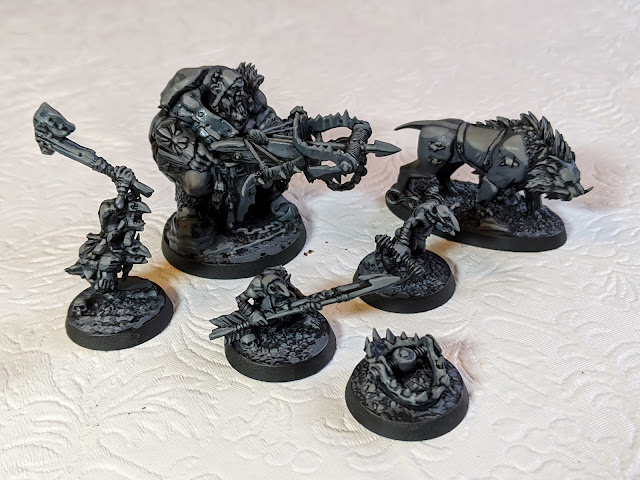 So what's the issue here? well what it comes down to is how much of the light spectrum I'm using. I obviously used a dark grey for my initial highlight and this is fine, but the next highlight is with a mid grey... meaning that the model overall remains very dark. My initial plan had been to quickly contrast paint over these models once I was finished with the exercise but this will further reduce the brightness of the models and end up looking pretty lousy.

So it's time to fix the mistake and go for something that will be a lot more visually interesting:

Enter Celestra Grey - I realised I really needed a brighter grey to give me an additional step before getting to pure white for the brightest edge highlights. I moved the light source further up so that there was a great top down element to the light. This was a huge take away for me. I realised that the directional light I've tended to apply to my models with an airbrush, does not match my brush work. The reason for this is down to the two stage method I use for applying a zenithal with my airbrush.
Step one is to apply a top down light followed by a second directional light from a 45 degree angle. The result is that the light source doesn't register as 45 degrees but rather somewhat higher up (exactly how much further up depends on the relative brightnesses of the two applications). When I brush paint, I have a tendency to reproduce only this second, 45 degree angle. This isn't as noticeable with my regular models as I am often working with translucency to maintain my initial zenithal mapping but it probably has been causing some slight discord with my final highlights which tend to be fairly opaque compared to the rest of my painting.

I also went back to rework huge swathes of the models with the mid tone greys, especially on the 'off' sides where there is only indirect light shining to brighten the models over all and give a greater degree of visual interest. I also pushed myself to ease off of full black for every shadow to help provide clear tonal variation and increase the range of depths that are registering to the eye. 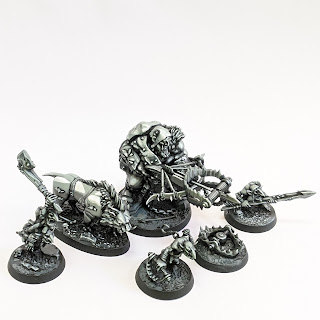 Over all this was maybe not the experiment I had intended. Certainly not what Figopedia was recommending in terms of two basic values - white and black. It also didn't give me the map I had hoped for to simply glaze colours over like I would with a regular zenith - the overall tone of the models remaining too dark to make this viable. It did however push me to really consider complex shapes and forms, learn about my current failings in handling light and give me some areas to continue working on for my painting.