March 22, 2020 Armies on Parade Army Painting Unit Gitz Gloomspite Goblin guide painting
Well it's 2020 and my #nyna (New Year, New Army) is Gloomspite Gitz. As mentioned in my previous post - I'm not dropping my Death Guard boys but I have a fieldable army there and can slowly add the few models I'm still missing but this is a chance to start on something new (well fairly new...)

Back to the Gitz - I picked up a sizeable Squig based force over the last year and set them aside for this project. I did however work on a few test pieces here and there. As always when starting a new project it is important to really have your painting scheme nailed down. I used my Zarbag's Gitz warband for Underworlds to test out and refine the schema I wanted to use. I actually did much of this on my YouTube livestream and it's still available:


In addition to having this reference, I also took notes on the process that I wanted to utilise. The method by which you take notes is highly individual and varies a lot from person to person. I know some folks that love to use an app or digital note taking, some will paint swatches into notebooks for a colour reference. The most important thing is that you have enough detail that you will be able to reproduce a matching model years later when you've forgotten everything you did originally. I've spoken before about how I stick to simple paints when painting for armies rather than custom blends - again this helps you reproduce the same results over time (assuming the paint is still available of course!). Here are the notes I made for my Gitz:


The results are also pretty good (click images to make them bigger): 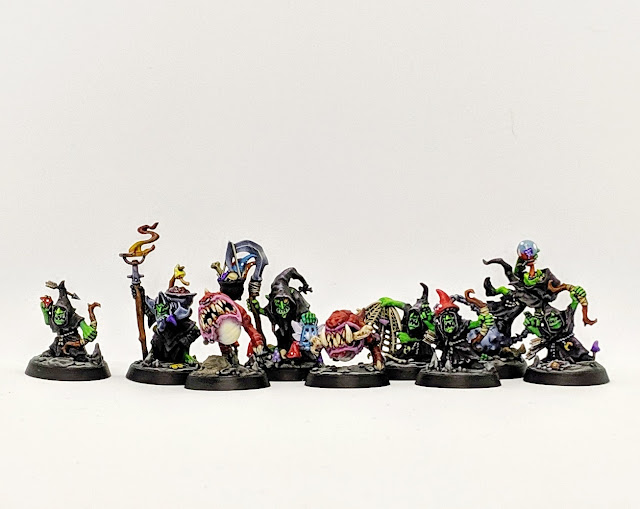 Having gone through the test models, I wanted to take it from the top and try a new set using the instructions to ensure they're able to guide me through the process. This also gave me a sense of the amount of time it would take to paint up models like this in fast way, although I did Zarbag's fairly quickly - I spent more time on them (deciding on the style and because I wanted them to a higher standard as a skirmish level game). It was time to test a more streamlined painting scheme with some hoppers. These two were needed for a Warcry campaign to supplement Zarbag's who I was using as the bulk of my warband. 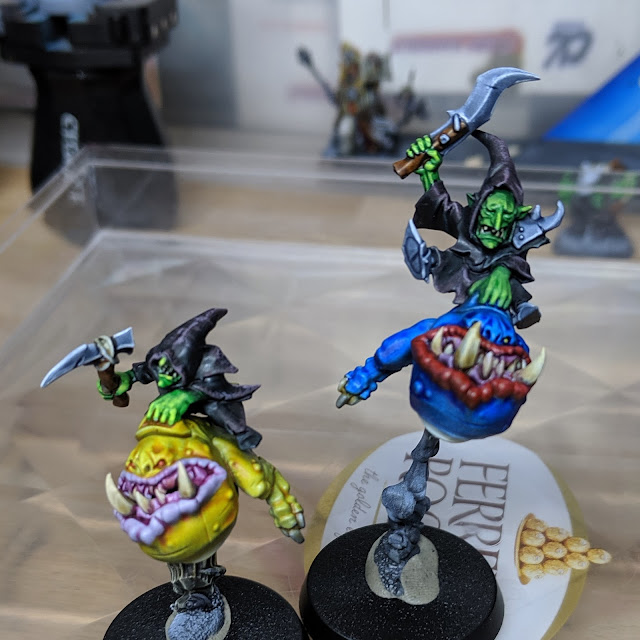 As with Zarbag's a heavy feature of this painting style is very carefully applied zenithal highlights to keep those robes nice and dark and minimise my work down the road.

The first thing I paint up is the skin and for this I am simply painting on a solid layer of GW Contrast Warp Lightning Green followed by some highlights of my favorite: Vallejo Game Colour Livery Green. This has been my go to green highlight for years being both bright and saturated, it really gives a great pop to almost any green (edge highlight a Dark Angels Space Marine with it and see what I mean).

The cloaks are a big part of the gitz and I wanted them to be something very quick to paint. Having only the most basic of zenithal on them ensures I can get them finished quickly and allows me to give the cloaks a little texture with some cross hatching for the highlighting. First I lay down a quick coat of Black Templars and then cross hatch over the highlighted areas with Scalecolour African Shadow, Indian Shadow and a mix of SC Indian Shadow and white. As I scale this up, I may simplify this process further but cross hatching is a technique I love for fabrics and this army is a great excuse to practice getting nice sharp brush strokes without having to worry too much about the quality of each stroke.

Next, I needed to get the metals painted. I wanted a 'quick' nmm - something I've been experimenting with since I started messing with Contrast paints. Previously I've been using a lot of Basilicanum Grey for steel but I pushed for a slightly more cartoon-y Contrast Space Wolf Grey highlighted up with a sharp edge highlight of white.

A quick note on white. I use two different whites in my painting. When airbrushing - I use Vallejo Artist's Acrylic White Ink. When brush painting I use Windsor and Newton Titanium White Artist's Acrylic paint. In neither case are these 'modeller's paints'. I find these paints a lot easier to work with texture wise (thickness and opacity) and less prone to 'chalking' in the way that is often seen when heavily thinning whites from more traditional lines.

With these done, the models are mostly completed. Fletching is drybrushed white, ropes are dotted with white on the high points and bones are drybrushed Vallejo Model Colour Ivory before they are all shaded with GW Contrast Skeleton Horde.

Leathers, Straps etc are painted with GW Contrast Snakebite Leather before being highlighted, textured and weathered with Scalecolour Nascar.

Cavern flooring - Another reason for going with a brighter steel is it allows me to use the darker GW Contrast Basilicanum Grey for the flooring, drybrushed white and then glazes of FW Sepia ink, Scalecolour Ardennes Green and Vallejo Game Colour Livery Green to give some interest.

Designing a colour scheme like this is only as good as the notes you take on it and for me, this is also the hardest part. For these gitz: 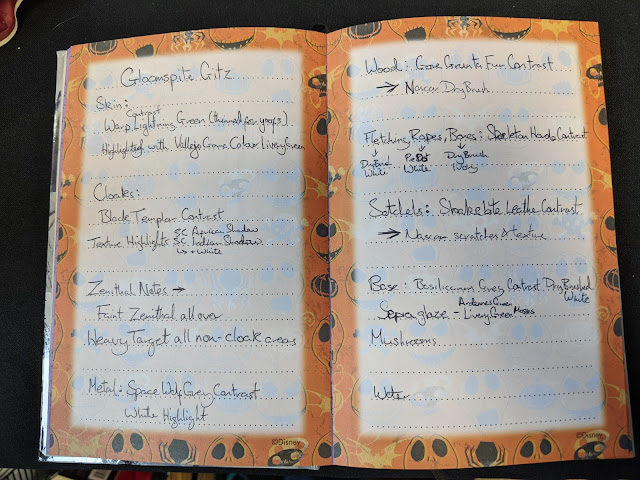 But what of the Squigs you ask? Well that's a great question. As you can tell from the ones above - I am not wedded to traditional 'red' Squigs and in fact wanted a selection of squig colours to showcase the GW Contrast line, however for the remaining Squigs, I will almost certainly go for a more traditional scheme and started experimenting with that on the Loonboss' mount as you can see: 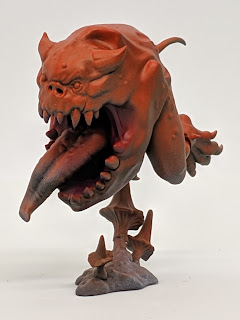 As you can see, this sis still an experiment in it's infancy and I will throw up another post at a later date with specifics on this as well as mushrooms for the bases!

Oh and as one last sneak peek - here's another squig I've been working on: 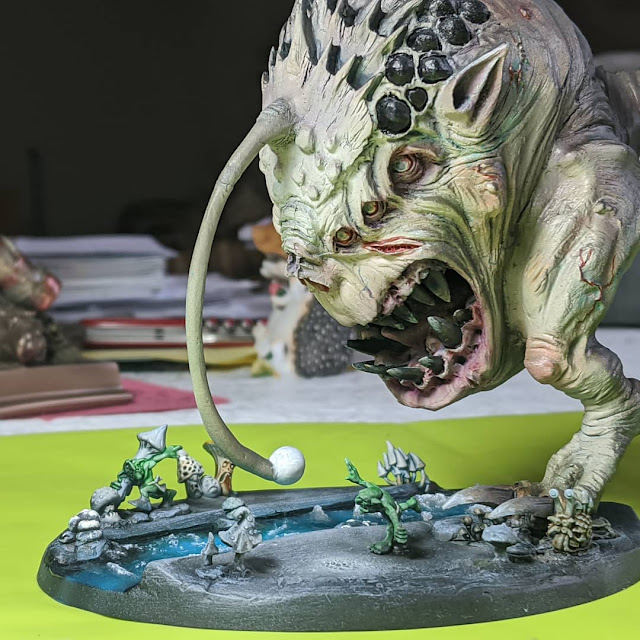