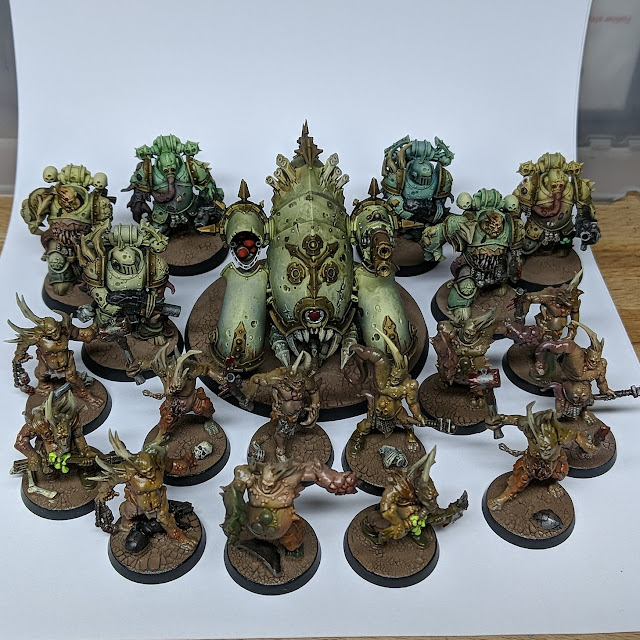 It's a new year, time for new beginnings and for me, that meant - deciding on a new armour colour scheme! Determining a new painting scheme is an interesting process. I really struggle to visualise how colours will look on a model (I've mentioned this before particularly - here). For the Death Guard army I've been building up as part of the Conquest Magazine subscription. The thing is - I never really understood why Death Guard changed uniform colour during their time lost in the warp. I can imagine the palette shifting, tainting somewhat but having a total uniform change in the warp just seems weird. So I'd decided to go for a more traditional, pre-heresy aesthetic. 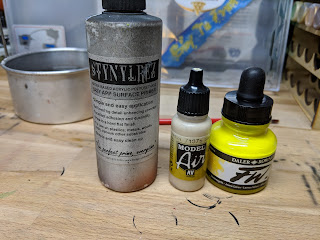 I knew I wanted to introduce the bone colour in the zenithal as a three stage - black, bone, white. So that was simple... until I applied it and realized it was still too white. I glazed with FW Lemon Yellow which shifted the overall colour a little towards green (thanks to filtering effect from the Blue-Black primer). 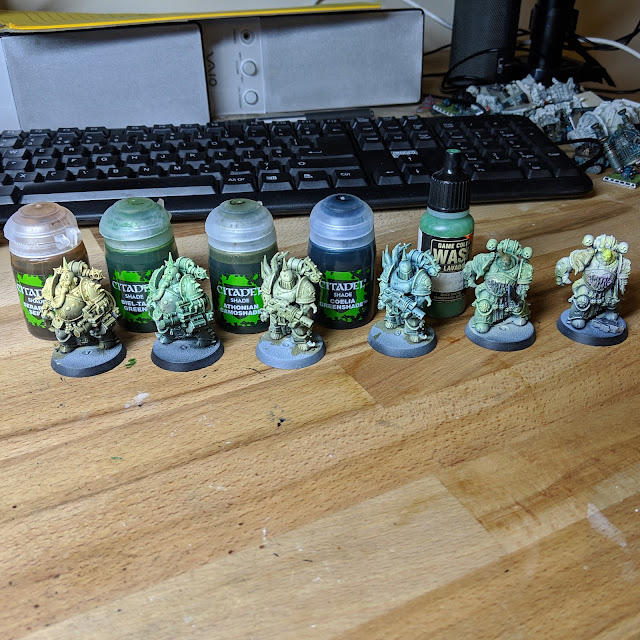 What you can see here is just a simple slopping on of washes followed by a drybrush of Bone and the resulting colours. The chap on the far right hasn't had a wash applied (although I did mess around a little with his stomach and head).

One of the things that really surprised me about this experiment is how they all actually look pretty fantastic. Sure there is more work to do but you could use pretty much any of these schemes and have something you can be proud to put on the table and is clearly a 'Death Guard' Scheme. 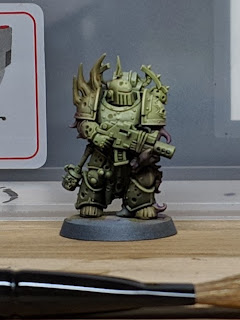 I think for a more contemporary scheme you may want to darken the underlying coat before wash application and then probably use the Biel-Tan Green (it's not clear in the picture but the VGC Green Wash leaves a bit of a chalky residue).

The next stage was to introduce the metals (Metallic Sharpies for the win) and throw in some additional tones for the corruption: 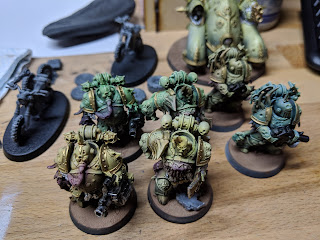 The 'tones' are judicious use of various GW shades. I have the full set of shades and I use them to glaze (thinned cautious application) fairly interchangeably depending on the effect I want: 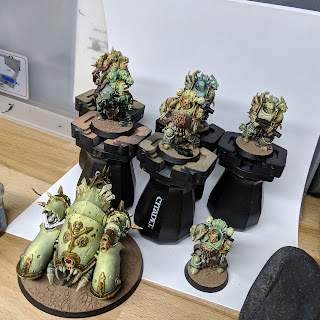 For the colour schemes that didn't cut it - you can repaint them but for these guys, I didn't bother. They will look a little different from the rest of the army but it's not the end of the world and given my drive to get this army out and ready for tabletop - I don't see the point in the extra time investment.