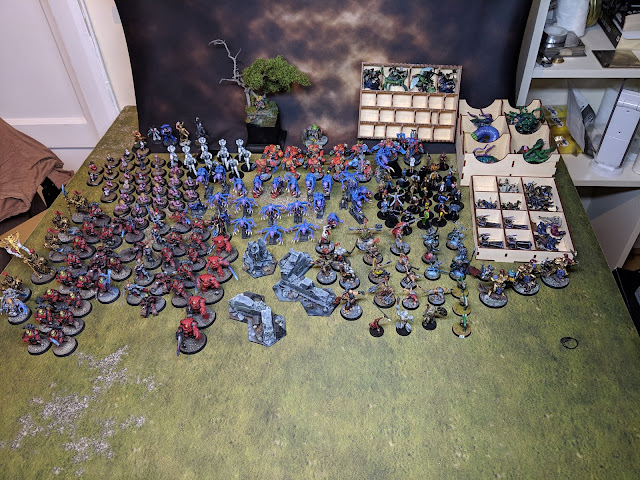 Warning: I'm a numbers guy... there's a lot of that in this post!

Well, I posted a few months ago that I had already completed my resolution to paint 365 minis in 2018. At that time I set myself a stretch goal of 500 minis!!! Soooo how did I do on that one? Well...

I didn't paint 500 minis from scratch in the year, but I completed 511 minis in 2018 and another 45 smaller pieces. A really healthy total I think. I feel like this year has taken me a long way toward getting back on top of that lead mountain. There is still a lot to do but I honestly think that I could be realistically on top of things by the end of 2019 if I continue with the same mindset.

Ok, ok so all that is very impressive but how does it compare to the number of miniatures acquired? I had it in my head that I wanted to try and paint twice as many minis as I ended up buying to ensure I stay ahead of the curve. I didn't quite manage this and a lot of the models that I ended up painting were newly bought (the Shadespire minis in particular). Overall though this did force me to reconsider any miniature purchase and held me back from getting a few games that I think I would have regretted in hindsight. There are still a few models I think I could have done without getting but a much smaller number than I could be facing!

I have relatively few unfinished pieces coming into the new year so there will be fewer 'easy' completes, however there are still a lot of incomplete minis from previous years (in particular the Arcadia Quest minis) which I'll be working on.

I think I am going to focus a little less on the numbers and a little more on the games. If at all possible - I want to end 2019 with no unpainted boardgames, either because I have painted them or because I have sold them. This will include things I pick up in 2019 like Splat Attack on preorder, Season 2 of Warhammer Underworlds and possibly Blackstone Fortress if I jump into it.
With all the hordes of Zombicide and continuing expansions for Mansions of Madness and Descent, this will be a tall order. It also leaves me to once again put wargame minis (Dystopian Wars, Uncharted Seas, WFB and Samurai) on the back burner and also more display oriented pieces like the bust. This is the part of the plan that I am not so sure about. It feels like a lot will get delayed as a result and I am not sure I am cool with that as a plan. I am also aware that for Zombicide in particular - I currently don't have a storage solution which means I may end up damaging the models.