September 14, 2018 guide painting preparing scenery sculpting
A few weeks ago, I wrote a post on nature based scenery / basing. One of the responses was that I should do a series of these articles looking at differing terrain types. I'm not sure how far I'll take this but for the next post I thought I would look at more Urban environments...

We're going to start in Galway, mostly because I happened to be there and have this article on my mind. It provides some good variety of building ages and because of the climate, shows some interesting weathering effects (buildings here literally go mouldy).

Stone - brick - concrete. The basic construction element has shifted over time and an interesting thing is that as the materials get more modern... they also seem to get more prone to breaking down. Stone and brick will stay pretty much the same from the day they are laid. Concrete is a little different. It 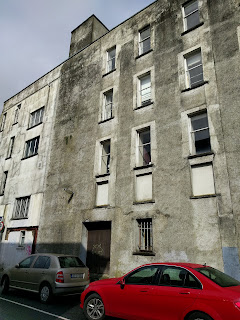 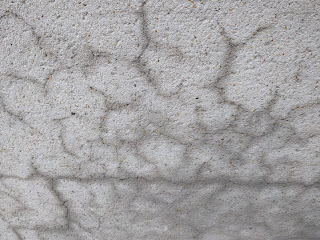 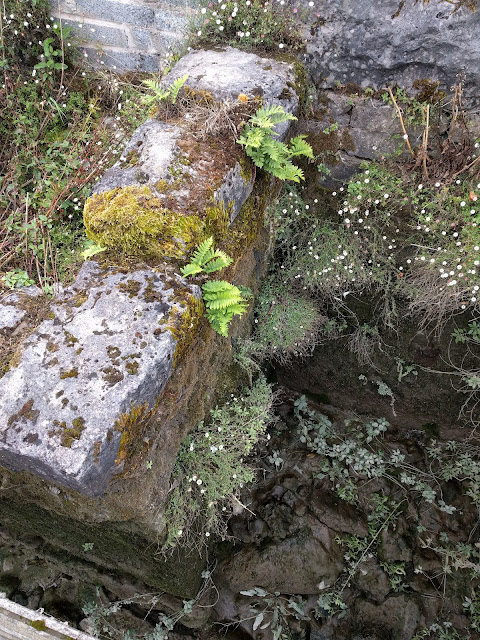 Stone's resilience is really pretty incredible. Stonehenge, Pyramids, endless castles - Stone structures can really last but even so - there's so much going on within the stone. Lichen, moss, plants can all get a foothold into stone and provide colours and textures that make things way more interesting than just drybrushing grey. 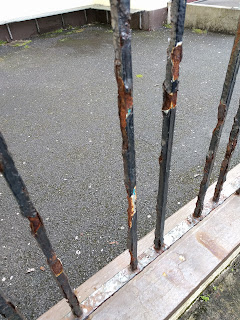 There are plenty of posts around on painting TMM, NMM, even rusting and weathering effects. I will leave those posts to speak to those points. I would focus on a couple of observations - nearly all metal in buildings is painted... even the stuff that's a girder inside something else! The other observation is that the paint won't always stop rust. Do also think about what the metal is - lead, copper and metal are all widely used in construction and all oxidize differently. Bronze too is a common material for ornamentation and statues. 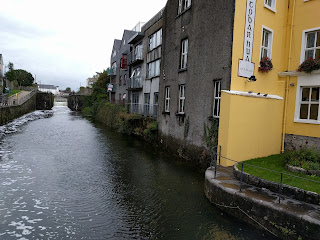 Water is a really powerful force in nature. It not only shapes our urban environment but it shapes the way we build. If you find a river out in the countryside and compare the banks and water flow to those in a city, you will see what I mean. Cities have to prevent erosion and that's tough to do requiring frequent maintenance. It also deepens rivers and shifts their patterns and even the water colour.

Wood really blurs the lines between man and nature, even when chopped and formed into the most regular, 'artificial' forms - the grain still exposes it's underlying origin as something from nature.
Wood introduces a great array of textures and colours as well as warmer tones that are often absent in other building materials. 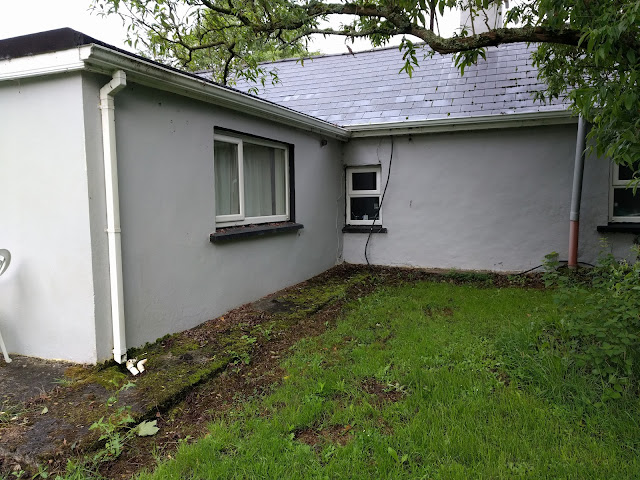 This is a fairly new building but it still clearly exhibits Nature is still the boss. Look at the moss and lichen growing around the base of the building. It's even starting to form on the roof around the edges of the tiles.
No matter how new a building is, or where it is - there are going to be impacts from the environment it exists in - mud, dust, sun damaged paint, rusting, mould - it's really no different to any other environment except that underneath it all - there are some 'straight lines'.

Taking that logic to the extreme we get this: 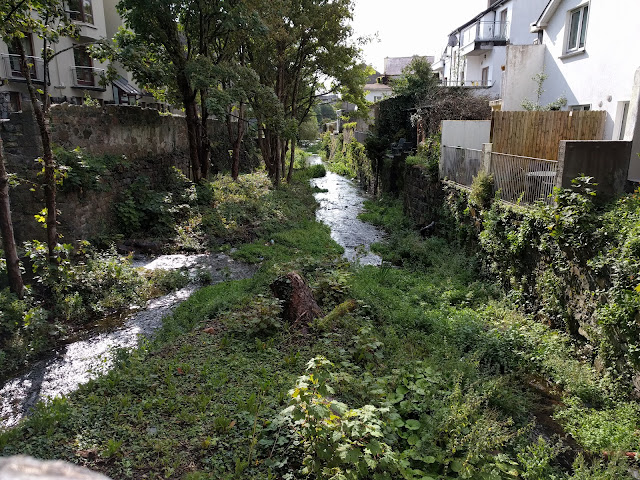 I absolutely love this picture. Right in the middle of Galway, this one river has exerted so much influence on the surrounding environment.

Of course nature isn't always so overt in it's infiltration: 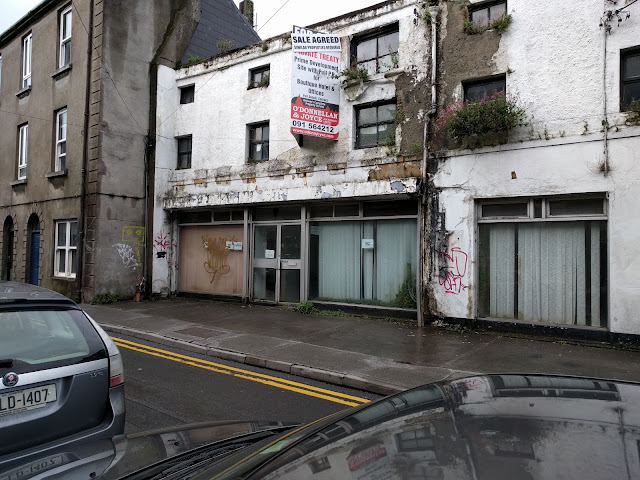 Water damage, weeds and man are all other natural influences to play a part in decay. I also want to just make a sidebar - graffiti is amazing at bringing realism. It's kind of like taxes - where there are people there's graffiti... it just appears. Even the romans were daubing dicks on the wall so if you want to get some genuine human influence into your scenery... it's all about the dick pics...

All the other photos in this article are taken by myself, however the photos in this section are sourced as indicated in the caption. I am fortunate enough not to live in a country ravaged by war and so I have sourced some images to cover this topic.

As these are other people's images, I've not really been able to compose shots to highlight my thoughts in quite the same manner but the fundamental point remains the same as everything else I've said in this and the previous post I wrote - you're looking to composition and you're building the story.

One of the issues I see most often - particularly in SciFi and Modern - is the lack of debris. Sure, over time it will get cleared away / repurposed but if the building was shelled in the current conflict - then you have a conservation of mass issue that you need to consider... all the glass, out of the windows, the interior walls, the furniture, the roofing... all of that stuff is still there, in some cases even the former occupants if they were unable to get out in time. If this is historic or a long running war back and forth, then there may be reasons for it to be missing - good stone is hard to find (ask the farmers in Ireland who have plenty thanks to the surrounding abandoned castles).


Look to the weak spots... It'll vary from building to building but glass and roofs are often the first to go. Interior walls are generally weaker than exterior. Flammables will go before steel girders and brick etc. Think also about what happened to the building - was it hit by a direct blast, shrapnel from a nearby explosion, fires, gunshot, nuclear shockwave etc.

In more modern conflicts vehicles and other street items are elements to also consider and balance. Again look at how the floor is literal debris - there's recent conflict and no time for clean up. 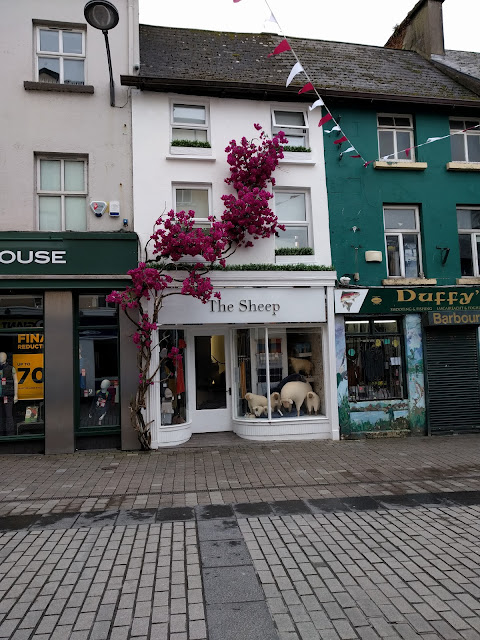 That's right folks. I'm setting y'all some homework on this one. This shop is pristine... it looks like it just came out of a box... and yet, unlike many of the buildings we pop on the gaming table, this looks real. So here's your question - why? What makes this one look real?
*Tip - click the image to see it in more detail.