Piracy in our hobby.

Scale75 have just put out a post on their facebook page calling an end to piracy in the miniature hobby.

3D printing is here to stay. The last few years have seen quality improve, equipment and running costs fall as the technology evolves. Unfortunately it has also lead to an increase in piracy in our hobby.

I normally steer clear of the political side of the industry on this blog but piracy is something that I feel kinda strongly about. My first job out of college was working in DVD distribution of foreign language films in the UK. In the span of a year, piracy virtually killed off the whole industry. Film and movies have been able to build out streaming infrastructure but it has still hit their profitability massively - particularly for the smaller, independent studios.

So what does this mean for the hobby market?

Well in all honesty it is tough to say. I haven't seen any studies on the level of pirated parts in the hobby, so this is all going to be pure speculation on my part.

Games Workshop is the big fish in our hobby. GW's Market Value (proxy for total value of the company) is a little over £1,000,000,000 (source). That's huge... but it's still only something like 1% of what the big movie companies were when they were being hammered by piracy. Even the giant is small fry in a global market. If piracy grows at a similar pace... we could well be faced with an implosion of the industry.

Ok well that's all very dramatic but is it realistic? My 2¢ on this is that people are kinda sucky. If they can get something cheaper - they will. We've seen it with the death of the high street from online retailers. With the new technology that is coming in the form of at home printing, what's likely to happen with the market?

There are a few variables at play here -

At Home Printing
The quality isn't there and I don't think it will be for several more years. Pricing of the machines will soon become affordable enough but I can also see the material costs falling a little but I can't see runtimes increasingly significantly (especially for high quality). Plastic is a pretty cheap good - although at the mercy of oil prices... the runtimes are limited by cooling times of the material to allow deposition of the next layer. There are means to improve this with fans etc but nothing I imagine will revolutionise things. The runtime limit is the real killer here combined with the bed sizes - it will cap the rate you can put out miniatures. You may well be able to print your killer kans but still be buying the boyz for instance.

The flip side - creating the files of these models is also important. 3D scanners will similarly become cheaper, higher resolution but also faster.

Recasters
This is not a new racket but with the increasing access to the internet and the pricing increases on the original models - this market has boomed. The increasing availability of tools like blue stuff as well as increasing familiarity with silicon moulds makes it easy to do. If the demand rises enough, the casters will also be able to improve quality to keep control of their market.


So what does it all mean?

Piracy is going to increase. It's likely to hit the gaming sector more than the painting focused hobbyists more. If you are painting for the joy of it - you will be more interested in quality of the piece and the detailing both of which will be better with the original. I really think the likes of Scale75 will be pretty safe - their main market is the painters and they focus on the quality of their sculpts and casts.

The games focused companies - particularly the ones with the higher end, more expensively priced models are the ones I see getting hit most immediately. There is the easiest way to make margins for the casters / print file scanners. The games have a large player base with users that are less concerned with model quality.

GW seems to be focused on designing miniatures that are harder to copy - this has gone surprisingly unchallenged by the customer base as it has resulted in single pose, fixed models that are very difficult to pose, adjust or customize. There was an interesting article on Bell of Lost Souls that seemed to edge toward this point citing the Rogue Trader box as an example but it's been happening for a while now particularly with the starter boxes (I first noticed it with the latest edition of Blood Bowl).


What to do about it?

Well for the games companies - I think pre painted options may help a great deal. It's proven very effective for FFG with X-Wing. Preprimed is another option that WizKids have been trying to provide a value add that is easy for the company to do but valuable in time saving for the consumer. These all help out the gamer side of the hobby who I also think are the most likely to opt for knock-offs.

All this mitigates the issues but frankly we just need people to be responsible. That's what this comes down to. If you buy a knock-off - you're incentivising companies to raise prices, move into other markets and fundamentally limit the things you love in the hobby. 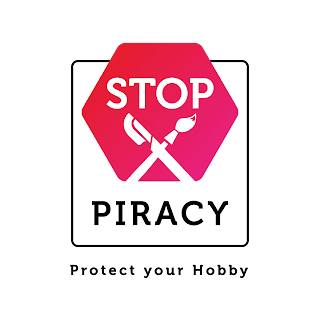