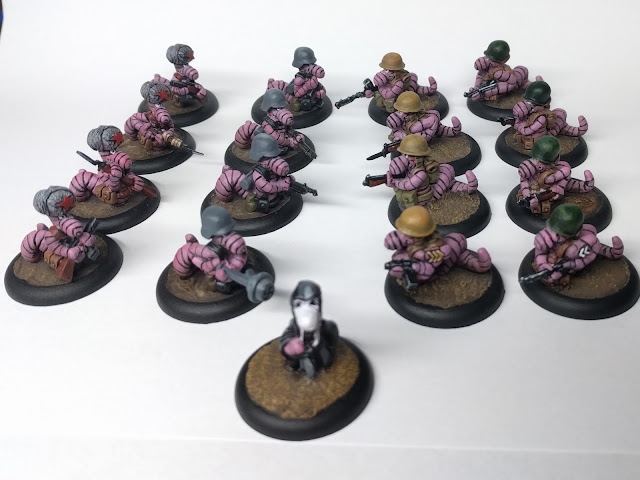 I will be posting one pic/day so you're feed won't get overloaded!


I have been sitting on a set of rules for a 'Worms' style wargame for years now... more than a decade in fact now I think about it... oh gods I'm old... sigh.

Anyway... in all that time, I've never actually played a game using these rules. Soo I got some friends over and cracked them out (along with a couple of games of Test of Honour! More in another post no doubt).

I was spurred into this by also having starting to paint up many of the worms minis that I had bought back then (and more recently to build out the collection). The worms miniatures can be found at Ironclad miniatures’ Grubs line and also MJ Figures’ Worms range

So I thought I would write up a quick post on how I painted these chaps up. 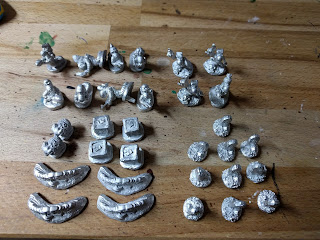 The minis are older sculpts and it shows in the casting - they needed quite a lot of cleaning, particularly to smooth off the base. So much so that I am waiting to get access to a belt sander before doing them.

The original minis - the MJ Figures line - are on sort of sculpted bases but the Ironclad minis (which are also a little bigger) are not. I ended up deciding to base all the minis to make them a little more consistent.

Because I didn't sand down the cast bases too enthusiastically, I knew I needed to do something to the bases to obscure the cast bases. My initial plan was some milliput to make a gradual hill... this worked fairly well but left a rather bland texture. To improve on this I opted to try out something I'd been meaning to test for a while: basing with Baking Powder!

I'd always been a bit scared of attempting baking powder bases as I could see horrible superglue frosting or weird bubbling being possibilities if I screwed up... as it turns out though it works remarkably well for small, fine texture on basing. There are a couple of things I have learnt as a result of this experiment:

Everyone knows that Worms are a popping hot pink color and I didn't want mine to miss out on this effect. After priming I hit them from below with Reaper HD Maroon red and from above with a couple of coats of Reaper Monster Maw: 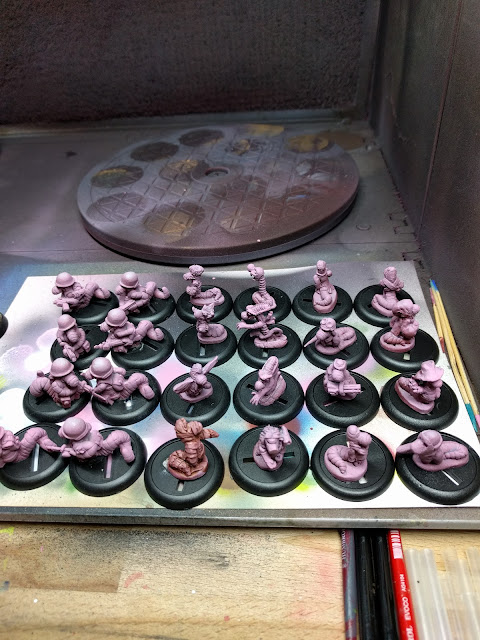 I wanted a really cartoon aesthetic and so needed to exaggerate the segments which are not particularly deeply carved. I had initially hoped to be able to just wash the model to get the effect (you can see one attempt on the Mummy Worm above). The result of these was disappointing. The wash tinted the pink pretty heavily without really defining the segments. In the end I opted for ScaleColor Inktensity Black to freehand in the rings: 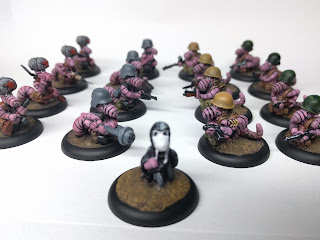 Having got a few of these chaps painted up - it was time to have them face off in a three way battle royale! Given it's Worms - it felt entirely appropriate to ad-lib the scenery and we opted for some deck boxes and bags of card sleeves. It was a little too sparse for a really interesting game but worked well enough for a test game: 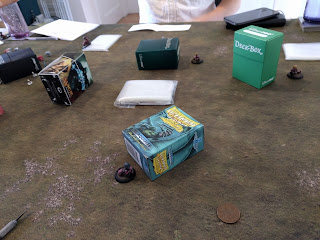 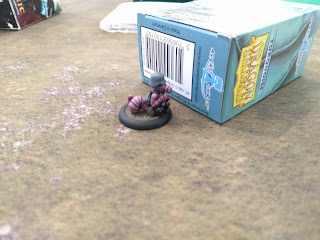 I have since gone back and revised the rules slightly. They are not mine and I am not sure how to reach the original creator (Mark Jenkins) for permission to further distribute. If anyone can put me in touch with him I'd appreciate.

Disclaimer: All work listed above is intended as Parody of Team17's Worms per The Copyright and Rights in Performances (Quotation and Parody) Regulations 2014 Section 30A. Nothing is endorsed by Team17.