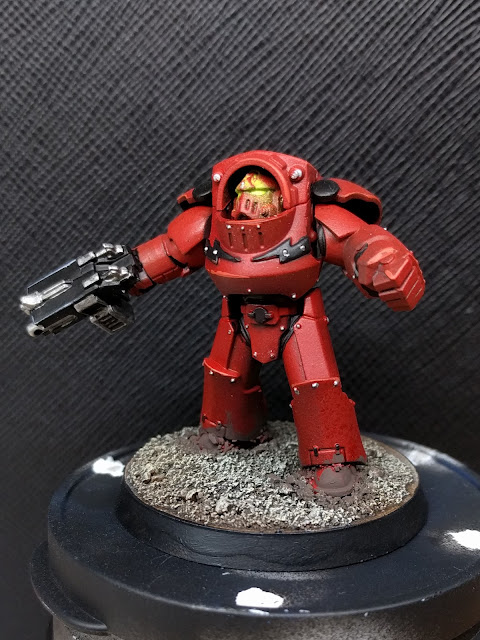 Still grinding through the Burning of Prospero box and making some headway, slow as it may be. With these chaps, and the Custodes (post coming soon so stay tuned!) - prep took a LONG time mostly due to the need to magnetize all the things to allow for weapons combinations. One of the things I realized with this technique is that shadowing and highlighting become very difficult to match up - more on this later in the article. 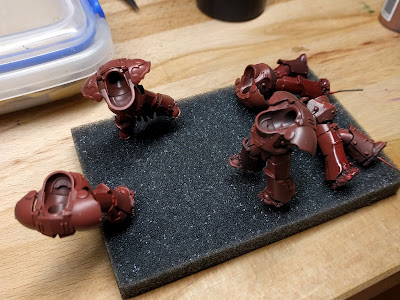 I was once again using the muted red technique I'd defined for the MkIII Marines although I pushed the red a little further as I'd ended up with an effect on the MkIIIs that felt a little too dark. The colour on these guys came out a lot nicer.
You can see that these chaps were also pretty dismantled when being painted. The main reason for this is the need to have the heads pop. At the time I was painting these, I wasn't confident in my ability to do this with the heads already in situ. The Livery Green glow on the eyes really demonstrates the limitation of my skill at this point. 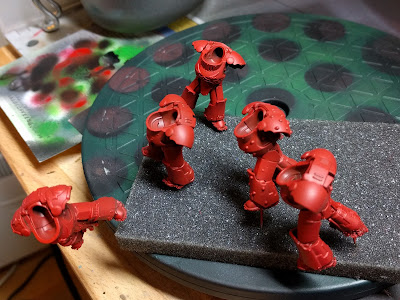 At this point I totally stalled out... I am finding this happen a lot with units - I'll get the base coat laid down quickly and then not want to take the time to put down the base coats on the secondary colours. For these guys, I ended up setting them to one side while I worked on the Custodes and only came back to them after the Custodes were finished. 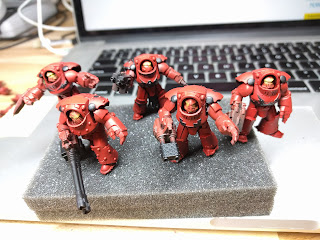 The black had to be followed up with silver (again using a silver sharpie for the studs) and then it was on to the OSL effects.
As I mentioned earlier the limbs proved to be tricky to match up to the torsos for shading and also the glow effects had to be even more muted than I'd usually do because I couldn't have a reflected glow on the torsos given there wouldn't always be a glowing item in hand. 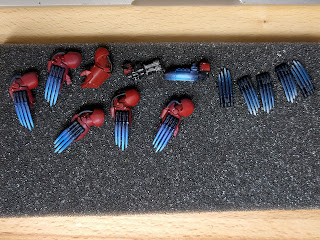 The full array of weapons combinations can be applied however the lightning claws for the left hand will need poster tack as there wasn't really space to embed magnets onto the claws.
The ground uses the same techniques again as all the other figures in this game, although I added a few features on some of these bases to liven them up a bit. It's interesting how much more base there is on these than the regular 32mm bases - it really feels like something has to be added to stop them looking weird.
I also did some mud stippling. I am still not super happy with how this effect comes out - it looks good at arm's length but really doesn't hold up to scrutiny. I think more layering is the answer but you again run into diminishing returns. Ahriman will give me a model to really work on this with as I want to build him up to really be something a little special. 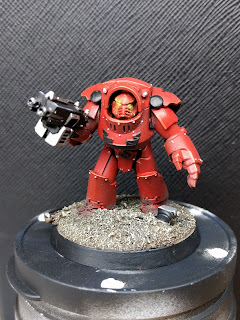 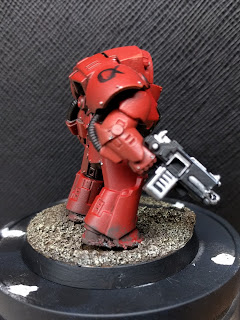 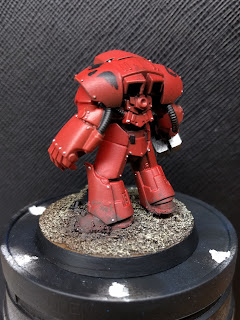 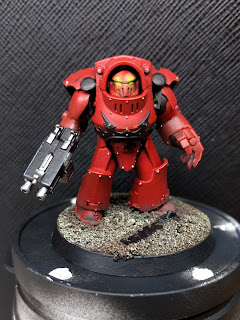 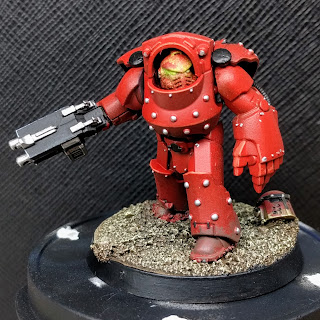 These guys are done to the most basic standard that I'm willing to call 'done'. There are a few easy things that could step up their game (better shading on backs, more careful edge highlighting on the reds and shading on the studs with some nuln oil)... however these models don't really get my motor running and I'm content to leave them at this level.