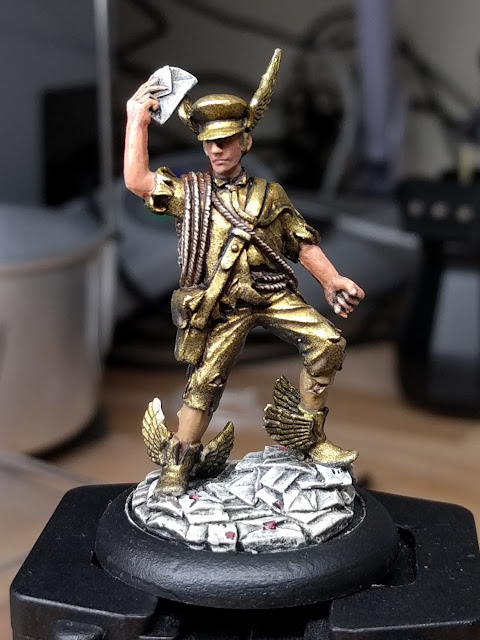 Faithful readers may recall that last year I put together three blog posts covering my painting of my first ever serious painting contest entry (here, here and here). The model was from a line of Discworld miniatures put out by Micro Arts Studios. These models are my most prized of miniatures and I have held off of painting them for many years, waiting until I felt I was good enough to work on them. I am finally starting to feel like I have reached that point. I am no Kirill Kanaev, and I still have plenty of scope to learn and improve, but I am at the point where I can finish a miniature, look at it and say...


"Wow, that looks good to me. I'm proud that I was able to produce that."

Having gotten to that point, I was comfortable starting on some of these beautiful miniatures. I have been working through the figures that feel easier to paint and that I am inspired by. There is no rush for me to complete these chaps (they are definitely not a part of my #donenotperfect mindset!).

After having had a major push on both the MkIII marines and a full BloodBowl Lizardmen team, I felt it was about time I indulged myself with some quality painting.

First up is Moist von Lipwig (aka Albert Spangler) from Going Postal sporting his Golden Suit. I had been inspired to paint this model after seeing a fantastic interpretation on the r/minipainting reddit thread).

I have mentioned before on the blog that I am really not a fan of TMM, however I needed to paint up 5 Legio Custodes for Burning of Prospero and figured that I might as well work on Moist at the same time. It also allowed me to use the Custodes as guinea pigs in airbrushing metallics - something I've not really attempted before. This proved to be a good thing as my Custodes saw some issues with medium separation that has left them a little speckly. I was fortunately able to fix this prior to laying down a basecoat on Moist: 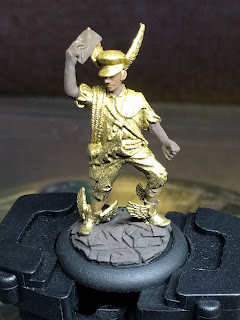 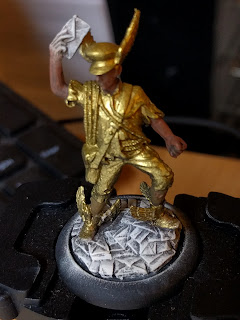 Something I have taken to doing, especially when I am using the airbrush to lay down a base colour rather than a simple zenithal prime, is laying down a coat of dark brown (AK Interactive WWI British Uniform Shadow in this case) on all other areas before painting up to the correct colour. This was particularly important here as the base colour was a shiny gold that really would show up in recesses. 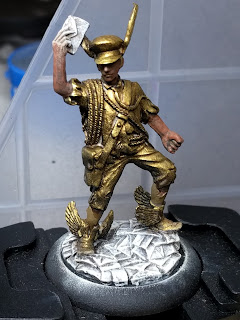 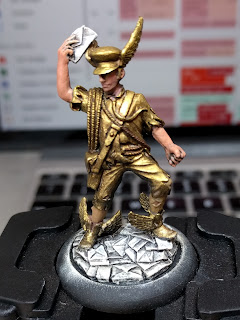 A lot of the figure is a fairly flat shiny gold. The issue is worsened by my lack of gold paints meaning the only way I could highlight was through mixing in silver which doesn't really produce quite the right effect (blending metallic paints with regular paints produces odd effects - see my next blog for a little more on this). The shadows were helped through the zenithal application ensuring there is still plenty of darker areas where the gold didn't lay down as heavily. Two things were needed to offset the heavy gold - the first is a LOT of attention to detail on anything that's not gold. The second is careful blacklining to ensure the gold didn't all just blend into one. I am notoriously lazy about applying black to make sections stand out. It is one of the reasons I am such a fan of zenithal as the solid black first prime means careful paint application generally allows colours to remain distinct. My brush control is not great and for a lot of models I often end up with too much black and things look cartoony at best.

Most of the Discworld miniatures don't have a sculpted base and I have been using casting to get something interesting on there. Moist has a great pile of mail that he's stood on. To make it really stand out, I went with a few layers of drybrushing, some black lining and picking out individual pieces in brighter white. The letters also provide a great opportunity for additional detailing with seals, stamps and addresses.

Flesh and faces are something I feel I do fairly well and enjoy working on. It is also an easy way to help the figure stand out. The eyes were a bit of a challenge as they are not very visible with the low brim of the cap. The shading on the jaw, lips and nose proved to be much more important. 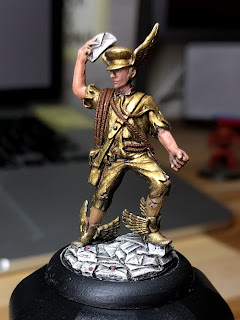 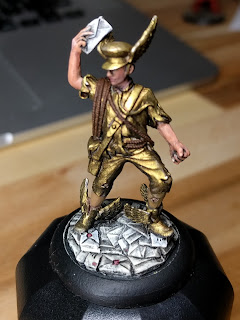 Originally I had intended for the rope to be somewhat darker but reviewing the model, I needed to increase the detailing of it to help draw the eye. 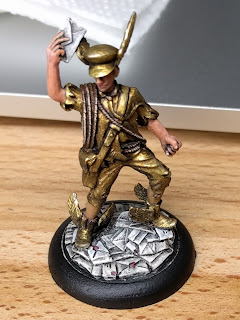 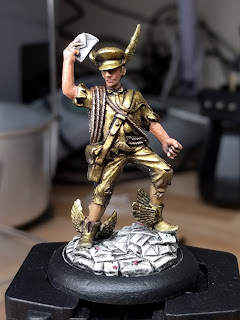 In my next post, I'll be looking at my Death with Guitar model that I have also just finished.