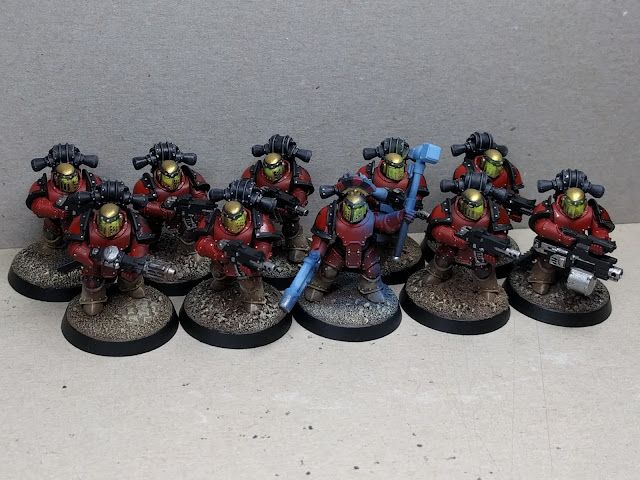 A few months ago I picked up Burning of Prospero when it was on crazy discount at my Friendly Local Gaming Store. I didn't have any major interest in the game itself but those Space Marines in Mark III 'Iron' Armour looked damn sexy! I'd looked at the MkIII Marines on the Forge World store but along with the legendary issues of resin quality/warping - they were also insanely expensive. I wasn't looking to field a whole army, I just wanted to have a few nice looking models to paint up.

Of course having picked up the game... I immediately put it in a box to ship to the UK and had to wait several months before I could crack it open.

I have of course been painting Blood Angels for a while now starting with airbrushing a Contemptor Dreadnought in my CK Studio class. I then took the method taught in that class to get my Space Hulk Termies. That method relied on Bloodletter glaze to tint a zenthial prime. That method gives a really popping, bright red which is great, but for Heresy, I wanted a more muted effect in line with the armour of the period (you can see 30k vs 40k armour styles - the new bloods are generally brighter).
Painting red with a glaze also requires a lot of coats (5 terminators needed 2 and a half pots of bloodletter!)

This new method was a lot simpler to execute and uses few coats and less paint. 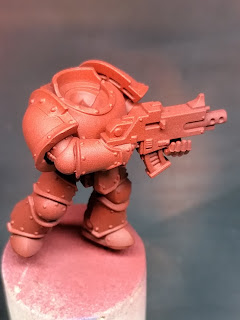 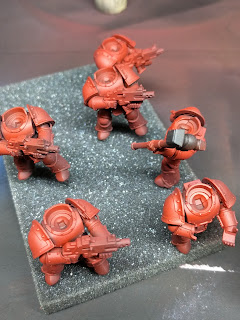 I kinda still wanted the option to play Prospero despite painting everything up as Blood Angels... Most of the units are actually different troop types on one side vs the other. The only overlap was the Thousand Sons field two units of Tactical marines while the Space Wolves field one. Blood angels veterans pack gold helmets so I figured I'd do one unit of Vets! After all the Heresy was a war of brother against brother.
As these are rank & file, I wasn't about to sink a load of time into NMM effects for them so I just went with some Army Painter Greedy Gold. 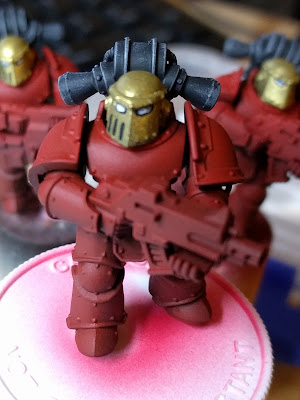 So far so good, I added in the black using AK Interactive Flat Black, which I discovered is much more prone to rubbing off than P3/GW. I also airbrushed up the bases with some Minitaire Cracked Leather, highlighted with a Vallejo Model Air Sand drybrush. I applied this also to the legs of the troops. Space Marines are meant to be squeaky clean but mid combat I think it's ok for them to be a little dirty. 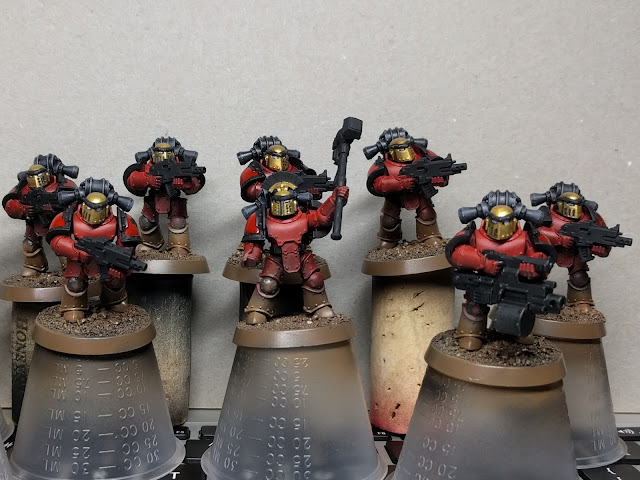 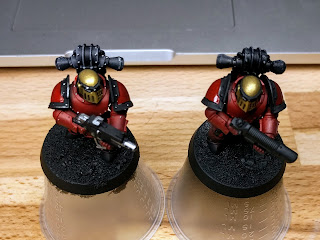 For these chaps the downfall was my need to paint the studs.... soo many damn studs. In the end though, I did get through it all and although I was certainly getting sloppier in my work - I'm pretty pleased with how they came out. 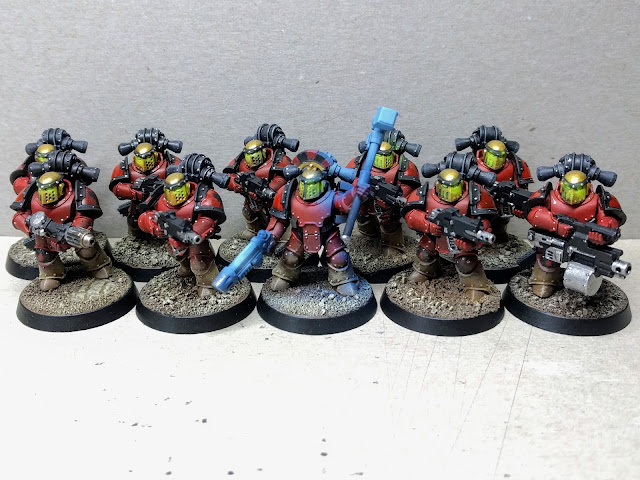 So that's the Vets done... on to the next two squads: 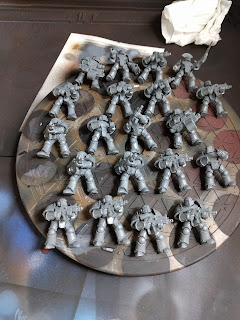