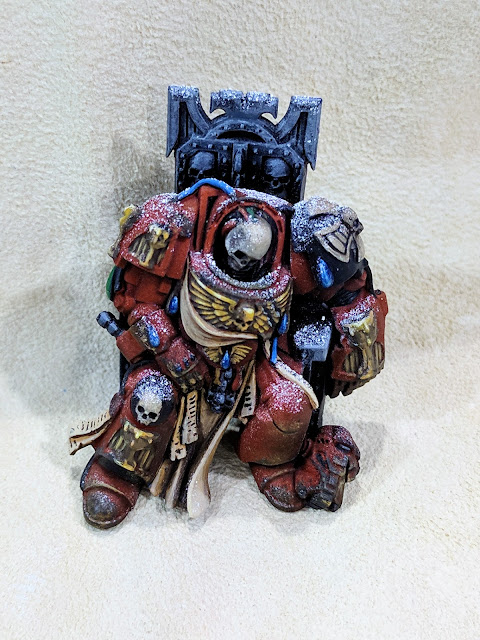 In the grim darkness of the future, a marine waits... for redemption.

In my previous post, I talked about how I got the super bright reds for my Blood Angel Terminators. In this piece we look at the first of the marines that I finished painting - the dead terminator. I have trawled the internet trying to find this Marine's name however I have had no success - If anyone finds out the name of this brave soldier, please let me know!

I chose this figure as my test piece, allowing me to figure out the paint scheme without risking damaging the 'unit cohesion' of the actual units in the game. Any differences could be put down to this marine being from a previous era. 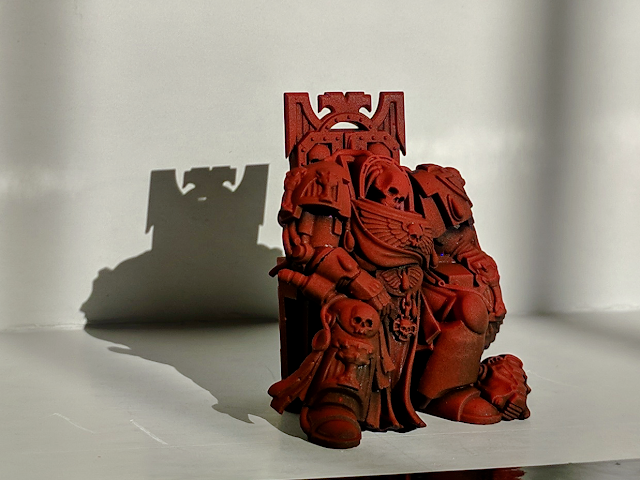 Having gotten the base red down, I quickly painted up the throne as a simple stone throne with carvings. Drybrushing is still my favorite way to get a good stone effect, I think I should have gone a little heavier on the edge highlighting (this is also true for the armour).
Once the throne was done, I layered up the skulls, parchment and fabrics going from Vallejo Chocolate Brown to Coat d'Arms Bone. Then the golds again starting with Vallejo Chocolate Brown but going up through Vallejo Filthy Brown and Army Painter Daemonic Yellow to Army Painter Matt White. 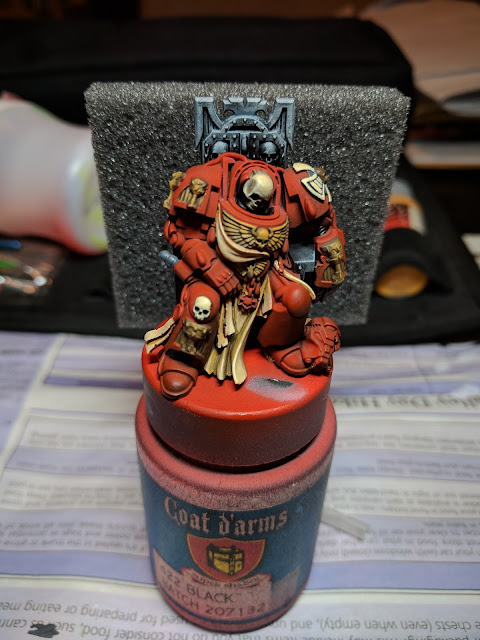 The final details to the parchments, blacking the left shoulder pad and right knee were added and some weathering through chipping and rusting were introduced.
Finally the gems were painted using a base of Army Painter Plate Mail Metal covered over with GWs Soulstone Blue technical paint. This was only my second time using this gem paint and the first time using a silver base (the intended base colour). It really does a nice job considering the simplicity. It works from multiple angles and feels really gem like although it breaks down a little on close inspection and I think careful painting with a gloss varnish may do a better job. Also for a shiny gem - this should be done AFTER laying down matt varnish or you will dull the effect. For a dead guy centuries old, it's not a big deal, but the living Terminators will have this process followed. 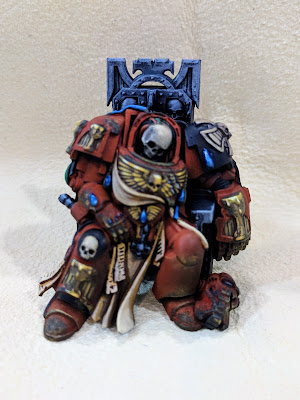 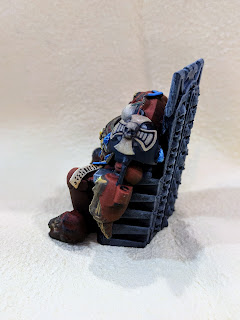 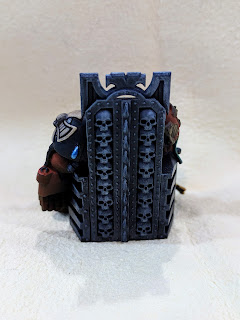 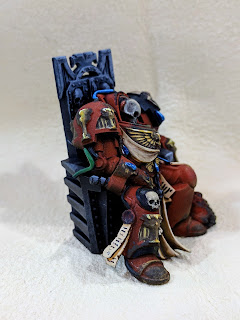 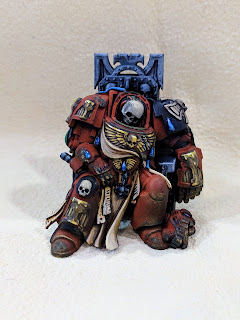 Wait, wasn't this meant to be about weathering? Ah well... yes! So...
I wanted this guy to look dusty with age - something I would've done with a distant, light airbrush of a light grey to accumulate the partly dried in the past. But... I'd just watched the latest Miniature Monthly video on weathering powders and put a call out to see if I could get some to try out. A friend in my local painting guild stepped up and lent me his Secret Weapon Pigments Oxide White with Vallejo Pigment Binder: 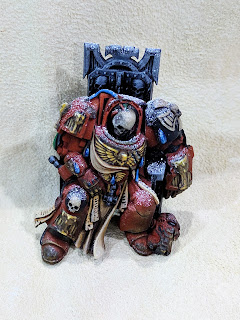 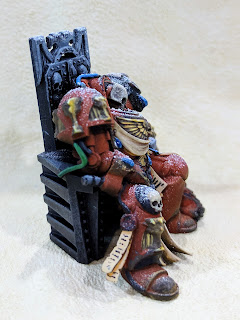 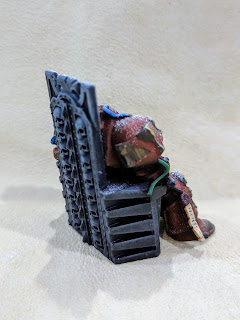 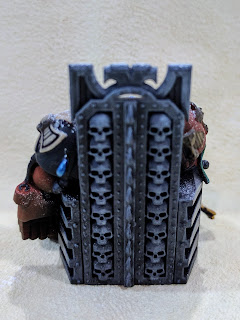 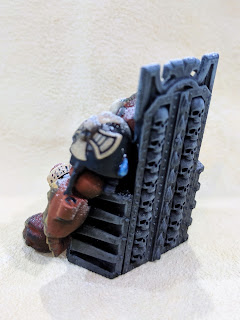 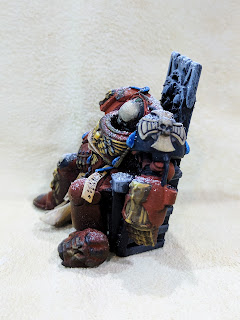 The tutorials I had seen from Miniature Monthly gave a slightly different effect from the one I was looking for however it seemed reasonable to me that I could get what I was after fairly simply by reversing a couple of the steps.
As I have learnt - testing is super important and being keen to not ruin an already painted model, I got myself a tester: 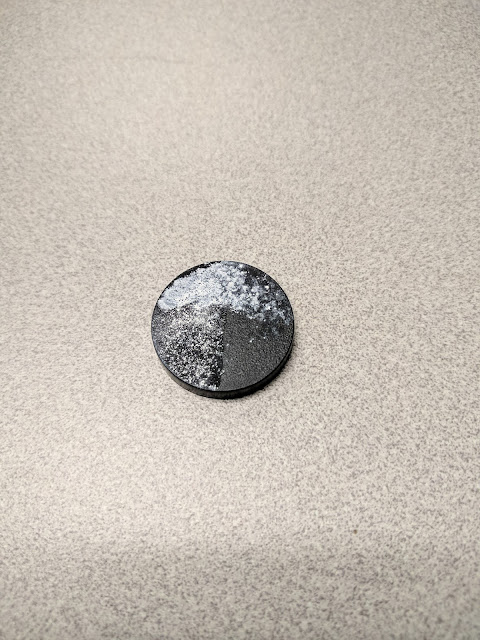 As you can probably tell there are four different areas.


I was pretty happy with the result of my own idea and the powder seemed to fix itself fairly well to the surface even after brushing it with a tissue to remove excess. You may notice the base is pretty shiny in areas - it seems the Pigment Binder gives a gloss finish akin to PVA glue thinned with water. Not a big deal for me this time but if you are concerned about this I would suggest using matt varnish as your binding agent instead.
The one downside is that the dust was a little too white for my tastes coming out more like a fresh dusting of snow, however considering I wasn't splashing out for any pigments or binders, I figured I'd just go for it. 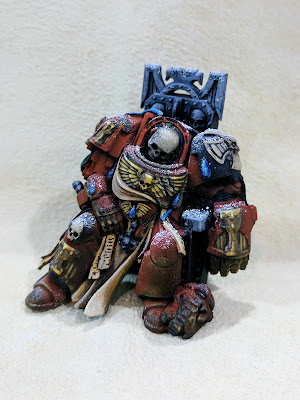 All in all, I am very happy with the result. The dust looks dusty, it has remained visible even after varnishing so it will stick around while gaming and it's given me a sense of how weathering powders behave.

Next up - I have some Terminators to paint! What will I do different from this chap?