June 12, 2012 Blood Bowl Chaos Dwarf painting station Skaven
I know, I know! It has been over a year and a lot has changed. The main thing is that I moved job and my new company is both awesome and really time consuming, as a result not only has the blog not been updated but the painting has fallen off and I have very little to show for a whole year. Sadly I expect this won't change any time soon and so don't get too excited that I am back! I will try and post once a week but I can honestly say that I may not keep it up and if I do, I may not be generating much stuff that is news worthy. Having said that, there is a whole year's worth of material to put into this blog so settle in for a rather epic installment!

One thing that you may notice is that a lot of this stuff is not entirely new, and that is especially true of my first submission... The Skumm Suckers, my Skaven Blood Bowl team:

To be perfectly honest, there isn't really anything new in this lot, nor have I really fielded them although some of my colleagues do play BloodBowl, they are sadly based in Dusseldorf and so it is a little tricky to get games in! However some of these figures haven't been shown in the blog fully finished. These guys do also set the scene for my second submission:

Ok so this is a little more exciting, although again they are not entirely new from the last year, I don't think that any of them have featured in the blog before now. This is the Orange Rage my Chaos Dwarf Blood Bowl team. The Dwarves themselves are wonderful figures from Impact Miniatures: Black Rock Dwarves. The Hobgoblins are in fact Ogre Gnobblars that I converted into a bit of a pastiche of my memories of the old GW Hobgoblins. The sculpting isn't great I have to admit but I have never really done much before and I loved the experience. In fact it took over 2 years to get these guys done from beginning to end and the satisfaction is immense. I also tried my hand at freehand detailing and that was an additional learning curve that came out rather well and hopefully some future posts will demonstrate some improvements in that area.

When I paint up BloodBowl Teams I have decided to try and go for completionism as I try to offer every possible combination allowed by the rules, there is one exception to this and that is (for most teams) I will limit the basic player type to 12 players rather than the 16 allowed in the latest version of the rules.

Looking back on this blog I realise that I have written a rather longer blog entry than I anticipated and I still have material to cover! So I am going to end this post and write the next one to go up in a few days! But before I go, one final treat (also from Impact Miniatures): 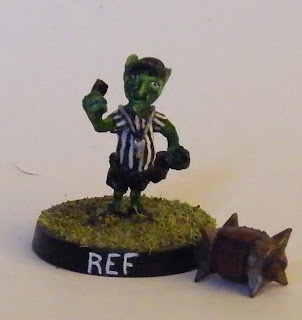