June 12, 2009 general Nuln Warhammer
Well after an astounding 3 votes... of which 2 were me... the unanimous vote was in favour of titling this elite troop of swordsmen - The King's Gate Guard
This name is not quite as random as it may at first appear. The King's Gate is the old name given to the Eastern Gate into the City of Nuln which is now more commonly referred to as Der Halbinsel Gate (The Peninsula Gate).This gate is little used but of vital importance as it leads directly into the heart of the military district of Nuln. The King's Gate Guard have kept the old name of the gate and also carry the image of a gate with a crown over it on their shield. 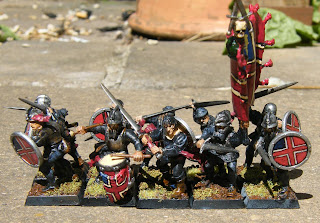 For a hugely in depth map of Nuln check out: City-State of Nuln

The next unit I will be looking to name are my Pistolliers. These guys will probably not make it onto the field very often as I would rather use the slot to field more artillery (it is a Nuln army after all!) but they need naming non-the-less!

I am not sure if I will continue to submit polls for the naming of units as there seems little point. Instead I will probably do some research and name them myself and post a potted history of the unit along side it.